Currently, West Indies are 220 for the loss of a wicket after 40 overs with opener, Chris Gayle batting on 134.

West Indies seem to be cruising along following Chris Gayle’s century against Zimbabwe in match 15 of the ICC Cricket World Cup 2015 at Manuka Oval in Canberra on Tuesday. Currently, West Indies are 220 for the loss of a wicket after 40 overs with opener, Chris Gayle batting on 134 and Marlon Samuels on 72. Catch live updates of the match between West Indies and Zimbabwe here 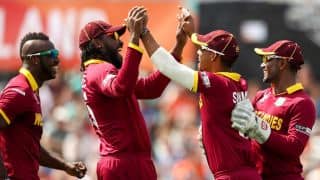 West Indies vs Pakistan in ICC Cricket World Cup 2015: Lowest ‘top’ score in a total of over 300 in ODIs