Opener Kraigg Brathwaite top-scored with 86 as the West Indies extended their lead beyond 300 on the third afternoon of the first Test against Zimbabwe at Queens Sports Club on Monday.

Opener Kraigg Brathwaite top-scored with 86 as the West Indies extended their lead beyond 300 on the third afternoon of the first Test against Zimbabwe at Queens Sports Club on Monday. Although Brathwaite was one of four wickets to fall in the second session, his knock set the West Indies on their way to a tea-time total of 244 for six in their second innings, which gave the tourists an overall lead of 304 runs. The West Indies began the third day on 88 for one, with Brathwaite on 38, and the visitors were forced to make slow but steady progress on a sluggish Queens pitch.

With Brathwaite dropped twice off the bowling of Graeme Cremer, Zimbabwe’s only success of the morning came when Kyle Jarvis trapped Kyle Hope lbw for a career-best 43, ending a partnership of 82 for the second wicket. Hope was replaced in the middle by his younger brother, Shai, who added 67 for the third wicket with Brathwaite.

However Zimbabwe struck back with four wickets in the hour before tea, with Brathwaite trapped lbw to offspinner Sikandar Raza, before Jarvis used the second new ball to dismiss Shai Hope for 44. Left-arm spinner Sean Williams also enjoyed success with the harder ball, as he had Jermaine Blackwood stumped and Shane Dowrich caught at slip. With Dowrich falling on the stroke of tea, Roston Chase was left unbeaten on an aggressive 38.

Zimbabwe had bowled the West Indies out for 219 on the opening day of the two-match series, but were then dismissed for 159 on day two. 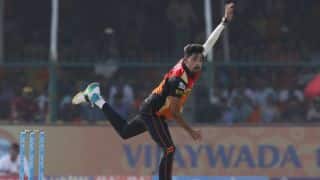 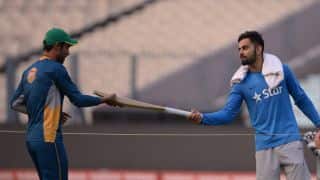