The West Indies were 9/1 in their second innings chasing 438 to win, against England at Sir Vivian Richards' Stadium in Antigua.

The West Indies were 9/1 in their second innings chasing 438 to win, against England at Sir Vivian Richards’ Stadium in Antigua on Thursday. West Indies lost their opener Kraigg Brathwaite to Stuart Broad, and now need 429 more runs to win with nine wickets in hand. Live Cricket Scores and Updates: West Indies vs England 1st Test Day 4

In the second session, Gary Ballance got to his hard-earned and much deserved century. Jos Buttler scored a quickfire 59 off 56 balls to help develop a strong base for England to declare and claim advantage. After the two batsmen fell, Cook declared immediately with the score at 333 for seven.

This meant that they set the homeside a massive target of 438 runs. As has become the routine now, West Indies gave up the firsat wicket without too much of a fight and found themselves at 9 for one when tea was called. Kraig Brathwaite was the man who got out to a Stuart Broad delivery.

West Indies will need a minimum of two batsmen to score hundreds to pose any kind of challenge and even then will require the other batsmen to chip in with small contributions rather than simply collapsing in the usual norm. They’re best bet is to play for a draw. England, from this point will not be content with a draw.

They’ll hope to pick a few wickets in the final session of today’s play to make things easy for them on the final day. The hosts will have a much stronger chance of drawing the match if they go without losing wickets through the final session.

In Photos: West Indies vs England 2015 1st Test at Antigua 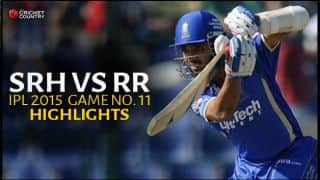