West Indies 7-wicket loss against England denied them a berth in the World Cup.

Sri Lanka s hopes to qualify for the 2019 World Cup were dashed when India whitewashed them 5-0 in their backyard. West Indies, on the other hand, marched with confidence to the ODIs after their T20I success against England. However, West Indies 7-wicket loss against England denied them a berth in the World Cup. With a deadline of September 30, West Indies (78 points) now cannot move ahead of Sri Lanka (86 points) in the ICC ODI rankings, despite the results in the remaining matches. West Indies had to win the series against England by either 5-0 or 4-0.

However, their fate was sealed in a 42-over-a-side contest. Along with Australia, Bangladesh, England, India, New Zealand, Pakistan and South Africa, the 1996 champions Sri Lanka also join the confirmed list. As for West Indies, the side has to now go through the qualifiers stage where they need to compete with 10 teams that also include bottom placed teams like Afghanistan, Ireland and Zimbabwe. The top 4 sides from the ICC World Cricket League Championship and the top two sides from the ICC World Cricket League Division 2 will also be part of the qualifiers.

Upon learning about Sri Lanka s berth in the 2019 World Cup, limited-overs skipper Upul Tharanga was relieved, It s no secret that we have been going through a tough time. But I want to say a big, big thank you to our fans who ve kept faith with us when things looked bleak. ICC events have always brought out the magic in Sri Lanka cricket, and I look forward to proving that once again. We have a clear plan toward the World Cup, and we will work hard at achieving each step. I know you will see Sri Lanka s special brand of cricket out there once again soon.

Meanwhile, Angelo Mathews too is delighted to be part of yet another World Cup, It is a pleasing to note that I will be playing another World Cup. I have played the 2011 tournament where we reached the finals and captained the 2015 edition and enjoyed both experiences. The sad part is that we had to wait till someone else won or someone else lost as we couldn’t do it on our own. But it’s pretty pleasing to qualify. We have worked very hard and now we need to get our preparation right for the event in 2019, Mathews told Cricbuzz.

On the other hand, West Indies batting coach Toby Radford is optimistic, We knew it was always going to be a tough ask. But we are very positive as a group and we are trying to develop in all our formats of cricket, so every game that comes now we will be positive and if that means qualifiers next year, it’s qualifiers next year and we’ll build our way back up. 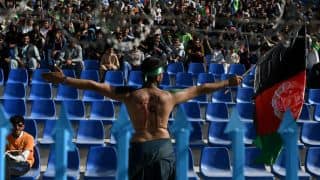