West Indies are chasing 192 for victory in the third Test against England at Kensington Oval in Barbados on Sunday. In reply, the hosts were were 4 for no loss at lunch on the third day. Kraigg Brathwaite and Shai Hope are at the crease. England were earlier bowled out for 123 in their second innings. Live Updates: West Indies vs England 3rd Test Day 3

England resumed their second innings on Day 3 at 39 for five. They looked to be little bit in their approach. Both over night batsmen Gary Ballance and Ben Stokes scored some important runs. Veerasammy Permaul broke the partnership when he got rid of Ballance. This was very well-palnned wicket. Permul was consistently bowling outside off-stump. The wicket ball pitched out side off and came in. Ballance had to play it. The left-hander defended, the ball took the edge of the bat and carried to slip. A very good low catch by Darren Bravo. Live Scorecard: West Indies vs England 3rd Test Day 3

After that wicket, Jos Butller and Stokes put up a 33 run partnership. Both batmen looked quite comfortable at the wicket. After the hour, England had scored 51 runs. When things were starting to look bright for the visitors, Perumal struck again. He got rid of Stokes. With this wickets the flood gates were opened and Jason Holder pounced on it. He was asked to bowl the 39th over and it was a double wicket maiden. He removed Chris Jordon and Stuart Broad in back to back deliveries. James Anderson survived the hat-trick ball but England were tottering at 98 for 9.

Buttler hit some lusty blows and took the England lead near 200-run mark. But Anderson failed to give him support as he became the victim of Jerome Taylor, second time in this game, visitors were all-out for 123. 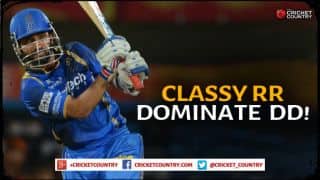