West Indies are 86 for 2 at lunch on Day Five of the second Test versus England. In pursuit of 322, West Indies have managed to ‘weather the storm’ amidst some tight bowling in the morning session. Kraigg Brathwaite holds fort and will need a support from the other end to sail West Indies forward. Nonetheless, courtesy England’s twin breakthroughs, they are still slightly ahead in this contest.

Wet outfields led to a delayed start. After few minutes lost, James Anderson and Stuart Broad started the proceedings. West Indian openers had a steep task to play out the first few hours of the day. Brathwaite kept a steady head and played on the backfoot with soft hands. He was quick between the wickets and pounced on the deliveries offering width and remaining full. Kieron Powell played his shots and was getting into a groove, before a spat with Anderson prompted him to throw his scalp. Broad angled one away and Powell went at it; giving a catch to Ben Stokes at fourth slip.

Kyle Hope came in at No. 3. He couldn’t open his account and was caught ‘ball-watching’ at the non-strikers’ end when Broad got a hand off a firm shot from Brathwaite and it dislodged the bails. Apart from the two dismissals, West Indies have shown character and maintain a healthy run-rate. If they do not self-impode, they will go for a win.

The current duo, Shai Hope and Brathwaite, will have to repeat their performances from the first innings and instill confidence of chasing the score.

For England, the pitch is still conducive for bowlers. There is some lateral movement, due to the weather, Broad has been at par and Moeen Ali is also hitting the deck. Both teams will start afresh post lunch in what is turning out to be a riveting contest at Headingley. 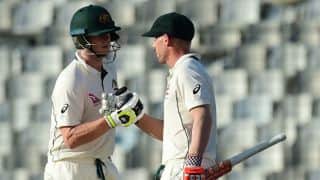