West Indies were 60 for one at lunch on the opening day of the first Test against Australia after winning the toss at Kensington Oval on Saturday. 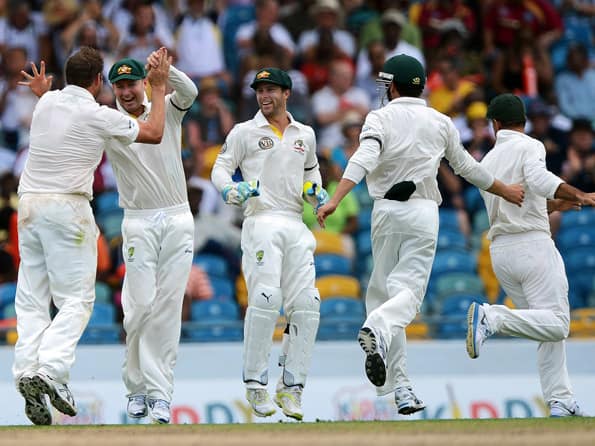 West Indies were 60 for one at lunch on the opening day of the first Test against Australia after winning the toss at Kensington Oval on Saturday.

The only breakthrough for Australia came in the 18th over with a change of tactics.

For his second spell, Ryan Harris had replaced Nathan Lyon at the Malcolm Marshall end and came around the wicket to opener Adrian Barath.

His third ball was a bouncer outside off stump that Barath hit high in the air for Peter Siddle to get under at fine-leg. It was a clear plan, well executed by Harris that Barath fell for having made 22.

Kraigg Brathwaite, who was on 24 at the break, batted through the morning but had a couple of moments of fortune.

In his third over, Siddle had him playing too early and, as his hand came off the bat, the ball looped back to the bowler who, despite getting his left hand down to the dropping ball, couldn’t hold on to the chance.

He also hit a cut in the air through the gully area that didn’t go to hand but prompted skipper Michael Clarke to have two players in that position for the rest of the morning.

Off-spinner Lyon was introduced into the attack in just the 12th over after the fast bowlers had found little response from a slow pitch where their footmarks were already very apparent.

Although he didn’t have any initial success the signs are that he could play a big part in the match.

The West Indies brought Shivnarine Chanderpaul back into the side with Kieran Powell and Ravi Rampaul missing out from the squad of 13 that had been named.

In the absence of Brad Haddin, wicket-keeper Matthew Wade made his debut and he received his baggy green from Ricky Ponting, before the start of play.

James Pattinson was named as 12th man while vice-captain Shane Watson will bat at number three for the first time with David Warner and Ed Cowan opening the batting.