West Indies put up 44 for 1 at stumps of Day Two of the Edgbaston Test, handing a 470 run lead to hosts England.

West Indies put up 44 for 1 at stumps of Day Two of the Edgbaston Test, handing a 470 run lead to hosts England. Earlier, they lost their first wicket early to be reduced to 13 for 1 in reply to England‘s first innings 514 for 8 decl. at tea on Day Two of the first Test at Edgbaston on Friday. Kieran Powell and Kyle Hope are unbeaten and face a mammoth task to face the menacing pair of James Anderson and Stuart Broad under lights in the final session of day’s play. Anderson already has a scalp under his belt; removing Kraigg Brathwaite for no score. Earlier Alastair Cook top-scored with 243, his fourth Test double century, before his dismissal enforced England captain Joe Root to declare shortly before tea. Cook was lbw on review to off-spinner Roston Chase. Chase led West Indies’ attack with 4 wickets for 113 runs in 26.2 overs. This fixture, the 50th Test at Edgbaston, is the first match to be played with a pink-ball in England.

It was Cook’s magnificent 243 that added majority of the runs. Cook, opening the innings, built two hundred-plus partnerships with Joe Root and Dawid Malan respectively. Root had earlier added 136 on Day One while Cook completed the fourth double-ton of his Test career on Day Two. Malan’s maiden half-century in Tests also came in the right time to put up the gigantic total for England. However, West Indies had a short stint of joy as they quickly removed the English middle-order after the wicket of Malan before the end of first session. With Cook’s wicket falling, England declared the innings with 514 for 8.

Roston Chase found some turns off the Edgbaston pitch, getting three wickets in the second session. Ben Stokes tried to go for a reverse sweep which ended up putting his gloves to. Jermaine Blackwood took his second catch of the day at slip to dismiss Stokes. Next to depart was Jonny Bairstow. In his first Test since the one in which he scored the heroic 99, Bairstow could only contribute with 10. Jason Holder’s delivery got the inside edge off his bat to hit the stumps. Moeen Ali too had a cameo, as he gave a simple catch to the cover fielder to end his knock for a 4-ball duck. The final wicket was that of Cook, who was out lbw. Though Marais Erasmus did not give in to the appeal at first, but his decision was reversed upon review.

England had the perfect start as James Anderson produced an edge off Kraigg Brathwaite, getting his out for a duck. After Brathwaite’s departure, Kieran Powell partnered with debutant Kyle Hope to build a 44-run partnership before play was abandoned due to rain. At stumps, 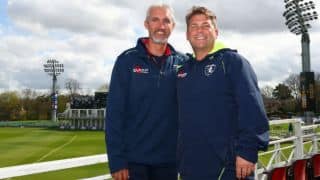 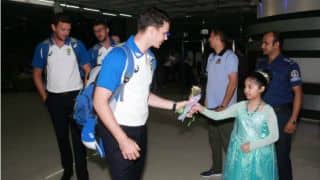