West Indies, looking to win their series 2-0, posted a first innings deficit after the second day of their second Test against New Zealand on Friday, bowled out for 209 and hugely indebted to a century from Marlon Samuels. West Indies, looking to win their series 2-0, posted a first innings deficit after the second day of their second Test against New Zealand on Friday, bowled out for 209 and hugely indebted to a century from Marlon Samuels.

By the close, the Black Caps were 59 for 2 for a lead of 110 with Martin Guptill – missing a fourth straight half century – and Bradley-John Watling the men out, both falling lbw to Narsingh Deonarine inside three overs late in the final session.

Guptill, 97 in the first innings of the first Test at North Sound, made 42 and Watling 11.

Earlier, the tourists had served notice of their intent to level the series in netting three top order wickets, including the prized scalp of Chris Gayle, in the opening session and their aggressivity in the field continued thereafter.

Before lunch, Gayle – who top-scored with 150 in the first Test which the West Indies won by nine wickets went for just eight from 58 balls as the hosts made a hesitant start.

Gayle, recalled after 18 months out of the Test loop due to a standoff between himself and the West Indies officials over comments he made after a sponsorship row, fell to the bowling of Neil Wagner, who drew a top edge towards point that Watling caught with aplomb.

Gayle’s paltry return came despite spending an hour and three quarters at the crease.

It could have been worse – he was dropped by Ross Tayor off Tim Southee before Wagner finished him off.

Also heading back to the pavilion were Kieran Powell, caught by Dean Brownlie at third slip for just ten off the bowling of Trent Boult and Assad Fudadin, whom Boult trapped lbw for five.

Marlon Samuels showed some resistance in the afternoon and went on to make 123 after the hosts were at one stage faltering at 83 for five before he holed out to deep point, caught by Wagner off the bowling of Doug Bracewell.

Shivnarine Chanderpaul fell, edging Southee to Taylor at slip for nine, while Narsingh Deonarine was caught behind for a duck off Boult.

Samuels drove Boult to the boundary for his 50 off 93 balls and for a while he had support from Denesh Ramdin, who made 15 before Wagner induced an edge to Kane Williamson at gully.

Skipper Darren Sammy made 32 in building a stand of 49 with Samuels as the West Indies laboured toward the Black Caps’ opening of 260 – only to fall lbw to Southee and Samuels’ demise ended their tilt before the hosts resumed in the field. (AFP) 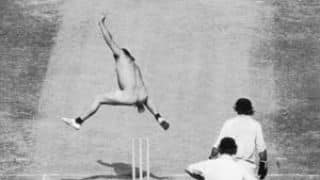