A slow Kensington Oval pitch and three dropped catches helped the West Indies make a solid start against Australia on the opening day of the first Test. 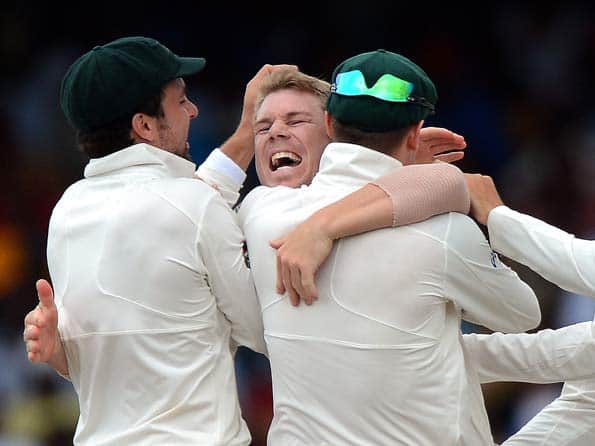 A slow Kensington Oval pitch and three dropped catches helped the West Indies make a solid start against Australia on the opening day of the first Test.

When rain curtailed the action on Saturday, the home side were 179 for 3 with the backbone of the score being a century second-wicket partnership between Kraigg Brathwaite and Kirk Edwards.

Having won the toss, the West Indies’ openers made a steady start and the initial breakthrough for Australia didn’t come until the 18th over.

For his second spell, Ryan Harris had replaced Nathan Lyon at the Malcolm Marshall end and came around the wicket to Adrian Barath.

His third ball was a bouncer outside off stump that Barath, who had made 22, hit high in the air for Peter Siddle to get under at fine-leg.

Edwards joined Brathwaite and he started slowly but the score was steadily building with Brathwaite being fortunate to survive two tough chances that he offered.

In his third over, Siddle had him playing too early and, as his hand came off the bat, the ball looped back to the bowler who, despite getting his left hand down to the dropping ball, couldn’t hold on.

Brathwaite moved on to 44 when Shane Watson induced an edge that went wide to Ricky Ponting’s right at second slip.

He did well to reach the ball but he couldn’t grasp it as the ball died on him.

It was Watson, himself, who then gave Edwards a life.

Siddle found the edge when the batsman had made 56 and the ball flew high above Watson’s head at fourth slip and, despite getting both hands to the ball, he couldn’t hang on.

It came at a time when Edwards had upped the tempo as he hit several boundaries and smashed Lyon over long-on for six.

When Edwards had reached 61 he smashed a return catch back at Warner who took it smartly.

It was his first international wicket and he was clearly delighted to have broken the 104-run second wicket partnership.

“Obviously we dropped three catches which can prove crucial in any parts of the game. We’ve got to keep taking our chances, we pride ourselves on that and I think we’ve got to be better tomorrow,” said Warner.

“I surprised myself. It got to me pretty fast and he hit it pretty hard.”

Siddle was probably the pick of a pace attack that had kept things tight all day and he was rewarded when Brathwaite played one loose shot too many.

He played at a ball slightly wide of the off stump and was caught behind for 57, an innings that had lasted over four hours and 199 balls.

It gave wicket-keeper Matthew Wade special cause for celebration as he had been presented with his baggy green before play and it was his first Test dismissal.

“As you all know I take my time, I look to get in and let the batters bat around me, make it easier for them,” said teenager Brathwaite.

“Early on with the new ball Harris bowled quite good. Hilfenhaus got a bit of swing but probably wasn’t getting the assistance like Harris. A little bit later I thought Watson had it swinging both ways more than anyone else.”

Steady rain arrived with 17 overs left in the day and with the light getting worse the umpires called an early end.