The West Indian players had earlier threatened to boycott the fourth game.

The standoff between the West Indies Cricket Board (WICB), the West Indies Players Association (WIPA), and the Dwayne Bravo-led West Indies team over pay disputes came to a head as the players decided to call off their tour to India after the fourth One-Day International. The Wavell Hinds-led WIPA, along with the WICB, and the players had been feuding since before the series started.

Breaking: WI tour to be called off after the ongoing ODI series, Srilanka front runners for a short tour to India.

There was a threat of the West Indian players pulling out before the opening ODI at Kochi, but they went on to play that match — and in fact win by 124 runs — before losing the second ODI after a huge collapse. However, the fourth ODI kicked off on a surprising note when West Indian skipper Dwayne Bravo was accompanied by the entire West Indies team at the time of the toss at the HPCA Stadium in Dharamshala. The West Indian players had earlier threatened to boycott the fourth game, but relented to play it in what was to be a series decider. According to reports, Sri Lanka are the team that could benefit from extra match practice.

India vs West Indies 4th ODI at Dharamsala: Ajinkya Rahane out for 68 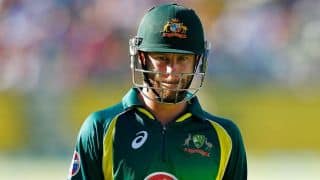