It is a reminder that Curtly Ambrose was in a West Indies side beaten inside two days by England at the Leeds ground 17 years ago.

Leeds: Curtly Ambrose was scathing about the West Indies‘ “totally embarrassing” defeat by England inside three days during last week’s first Test at Edgbaston. But as the three-match series heads to Headingley, where the second Test starts on Friday, it is a reminder the former fast bowler was in a West Indies side beaten inside two days by England at the Leeds ground 17 years ago. In 2000, the teams started the fourth Test of a five-match series at Yorkshire’s headquarters all square at 1-1. Whereas England victories over the men from the Caribbean have now become commonplace 2000 was the last time the West Indies won a Test on English soil it was a very different story at the turn of the century. FULL CRICKET SCORECARD: England vs West Indies 2017 – 2nd Test at Headingley

Prior to the 2000 campaign, which England eventually took 3-1, you had to go back to 1969 for the last time England won a Test series against the West Indies. If the team of 17 years ago was not as menacing as the one that inflicted successive ‘blackwashes’ on England in the mid-1980s, it still had players of the calibre of Ambrose, fellow fast bowler Courtney Walsh and star batsman Brian Lara. And yet England managed to produce the first two-day Test win by any side for 54 years and England’s first since hammering South Africa at Old Trafford in 1912.

What made it even sweeter for the Headingley faithful, who will hope it is an omen for an England team now captained by Yorkshire’s Joe Root and featuring county colleague Jonny Bairstow, was that several local heroes played key roles in a stunning victory. Yorkshire all-rounder Craig White took his maiden Test ‘five for’ in West Indies’ first innings 172. Stuart Law urges West Indies to ignore Curtly Ambrose’s ‘pathetic’ remark

County colleague Michael Vaughan, the future England captain, made his then Test-best score of 76 in a reply of 272. England were indebted to another Yorkshireman in Darren Gough for sparking a slump that saw the West Indies bowled out for just 61 in 26.2 overs — a second-innings slide that makes last week’s twin collapses in Birmingham look almost tame by comparison.

The fast bowler had Adrian Griffith and Wavell Hinds both out first ball. Their fellow left-hander Lara survived the hat-trick but fell in Gough’s next over, lbw without playing a shot for the second time in the match. Andrew Caddick rounded things off with a remarkable spell of five for five in 15 balls, including four wickets in an over, after the Somerset paceman was switched to the Football Stand End (as both fans of Yorkshire and the adjoining Leeds rugby football league club have long called it). ENG vs WI, 1st Test: Ambrose labels current WI side “pathetic” and “embarrassing”

Ridley Jacobs was lbw to the first ball before Caddick shattered the stumps of Nixon McLean, Ambrose and Reon King in four legitimate deliveries. Another eight balls and Caddick had finished the job, bowling Walsh to give England victory by an innings and 39 runs. Much has changed in the intervening 17 years for example the players and press at Headingley have moved from the Football Stand to the Carnegie Pavilion barely a glint in an architect’s eye in 2000 at the opposite Kirkstall Lane End.

And yet the post-match comments of West Indies captain Jimmy Adams, now their director of cricket, could, rather worryingly, just as easily have come from current coach Stuart Law.”We have the fellows who can do the job,” said senior batsman Adams. “But a lot of our players are starting their careers and are finding out just how hard Test cricket can be.” 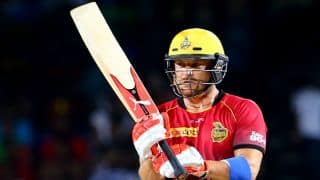 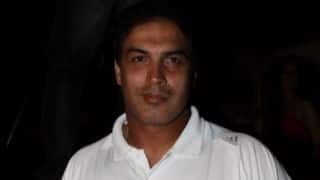