West Indies will hosts Australia in Match 2 of Tri-Nation Series at Guyana on Sunday.

Australia are all set to create an impact with their first match in Tri-Nation series against hosts West Indies in Guyana on Sunday. On speaking about Australia’s preparations against hosts, skipper Steven Smith spoke about how his batsmen have to stand up against bowling spearhead Sunil Narine. Looking at Windies earlier match, Smith announced their playing XI for Sunday’s match. West Indies have already started off their campaign on a positive note with win against South Africa by 4 wickets with efforts by Sunil Narine and Kieron Pollard. Narine’s bowling figures 6 for 27 has laid the foundation for his team. With the way pitch is favoring the hosts as compared to the ones played in Australia, Smith feels his batsmen need to be careful with their innings. Full Cricket Scorecard: West Indies vs Australia, 2nd ODI Match, Australia and South Africa in West Indies Tri-Series, 2016

While in conversation with Smith, he said, “I think it’s about each individual batter having a plan against him. Narine’s a quality bowler with a different set of skills than we’re used to seeing, (but) a lot of guys have seen him now and know what he brings to the table. It’s probably not going to be really high-scoring games, particularly in the middle-overs against the spinners,” Smith opined, reported on cricbuzz.com. “It’s about making sure we’re able to rotate the strike and if we get a bad ball to put it away. In Australia, where the bounce is consistent and the ball doesn’t spin a great deal, you can hit through the line and take the game on a little bit more. It’s about making sure we’re smart with our skills.”

Smith also felt, the best time to bring out the best innings is during the initial overs, “It looks like it’s going to be one of those wickets where the new ball is the easiest time to bat and then the wicket slows up and gets a little bit harder to score. So if we try and make the most of those first 6-10 overs, hopefully that can hold us in good stead for the rest of the innings.” ALSO READ: WI vs AUS, Tri-Nation Series 2016, Match 2: Predictions and Preview

Australia have zeroed down on 12 men who will make the cut for Sunday’s match that excludes George Bailey, Travis Head, Nathan Coulter-Nile and James Faulkner. “It was nice to see the game yesterday. Obviously it’s a different wicket but I think conditions will be pretty similar. We’ll have another look in the morning and see how we go. I think for this wicket we’ve got a good mix; guys who can penetrate the wicket quite hard and hit good areas, a couple of spinners and guys who can bowl a lot of cutters, which are going to work well on that wicket. So I think we’ve got the balance right for the first game,” Smith said. 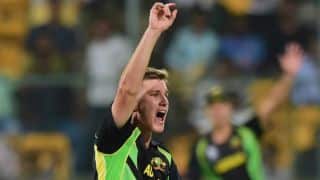