After Australia’s loss against West Indies in 5th ODI, George Bailey aims for better batting performance at Barbados. According to Bailey, Australia lack the confidence in the current Tri-Nation series they carried throughout the ICC World Cup 2015. Although, they rank at top of the table with some massive wins, they are yet to recover from the shocking defeat against host. It is not just Bailey, but skipper Steven Smith also blaming the substandard performance for defeat against Windies. The visitors were found struggling as they managed to put up just 93 runs on board by 15th over and finding boundaries occasionally. They later finished off well with 265 for 7 on board, thanks to the partnership between Usman Khawaja and Smith of 170 runs. FULL CRICKET SCORECARD: West Indies vs South Africa, 6th ODI Match

It was pretty much a similar situation against South Africa as well as they managed to score just 103 runs after 35th over, but their fight against Porteas with ball in the second innings provided them 36-runs win. Looking at these situations, Bailey was sure that Australia needed to work in their next match against South Africa at Barbados on Sunday. While speaking to cricket.com.au, Bailey added, “That’s under where we’d like to be, and both from pretty good positions in terms of having wickets in hand. So we’ve got to come up with some different plans. You might be lured in here a little bit with the short boundaries, and that’s probably fine if you’re the size of Kieron Pollard or Mitch Marsh, but with someone like me you’ve got to be a bit smarter and come up with a different way of doing that. We certainly had the foundation; it was just a matter of doing it.” ALSO READ: Tri-Nation series 2016, 6th ODI, WI vs SA: Preview and Predictions

He further added, “I would have liked to have done a little bit better, but I thought the West Indies also bowled pretty well.” During World Cup, Australia’s ability to accelerate late in their innings was the driving force for their win. Bailey also feels Caribbean’s slow pitch might be factor for their slow runs in initial overs. Bailey added, “I think what we’re not getting that we normally get in the last 10 to 15 overs is a lot more boundaries. I don’t think we’ve cleared the fence as much as the Australian team has done in the past one or two years. So that’s a change; finding a way to get those boundaries or if we can’t, finding a way to find a few more twos. The two grounds that we’ve played at so far, what we’ve seen in the last 15 overs is if you can be taking wickets, it’s really hard for a batsman to start. It’s an area for us to improve, but on the flip side it’s also the area we won the game against South Africa.”

One of the key players for Australia in World Cup triumph was Glenn Maxwell, who was kept out in the previous innings and Travis Head got his first game for the national side. Smith has indicated to include Maxwell for the coming match against South Africa at Barbados and mentioned, “ We got ourselves into a pretty good position.  We had quite a few wickets in the shed and we weren’t quite able to accelerate as well as we would have liked from 30 to 40 overs and then from 40 to 50 overs. So we were probably 15-20 runs short. I’m sure (Maxwell) will be talked about in Barbados. I guess he sort of lacked a little bit of consistency in the middle order in the last 10 or so one-dayers, so we left him out for these couple of games.” 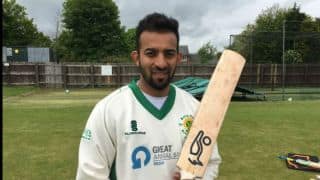