The first instance of a 35-year-old debutant scoring a fifty came as early as in the first ever Test.

At 35 years 242 days, Adam Voges was already the third-oldest Test debutant in the 21st century (after Bryce McGain, 36 years 359 days and Shaun Udal, 36 years 239 days) when he took field against West Indies at Windsor Park, Roseau, Dominica. As Australian wickets fell like ninepins against Devendra Bishoo on Day Two of the Test, Voges stood firm, reaching a well-compiled hundred when nobody else crossed 35. LIVE SCORECARD: West Indies vs Australia 1st Test, Day 2 at Dominica

The first instance of a 35-year-old debutant scoring a fifty came as early as in the first ever Test: Harry Jupp, was 35 years 116 days old when he did the same. Dave Houghton (121) became the first to score a hundred, as late as in 1992. He was 35 years 117 days — 125 days younger to what Voges is now. LIVE UPDATES: West Indies vs Australia 1st Test, Day 2 at Dominica

Voges also became the third Australian 35-or-more-years-old after Arthur Richardson and Albert Hartkopf to score a fifty on Test debut.

The Sydney Test of 1924-25 saw Richardson score 98. Tich Freeman, the legendary Kent bowler (with not much reputation for his batting), contributed with 50 not out at No. 10 (and helping fellow Kentish Frank Woolley add 128 for the 9th wicket) in the same Test. 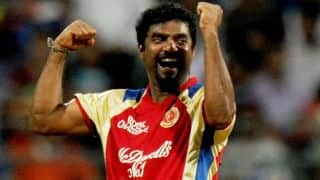