Jerome Taylor led West Indies’ early charge, getting David Warner off the third ball of the match, and Shaun Marsh soon after. Warner seemed surprised at the extra bounce, when a ball pitched on length and leaped to catch the shoulder of his bat and travel to Shai Hope’s hands in the slips. Marsh was attempting to be careful in avoiding his own downfall, leaving the outswinging ball when he could, but Taylor was swinging the ball both ways, and off the last delivery of the fifth  over, he failed to negotiate a full inswinging delivery, which hit his pads in front middle and leg stumps. LIVE BLOG

Kemar Roach, who hadn’t been bowling with the same menace, took a catch off Michael Clarke when his ball hit the upper half of Clarke’s bat to lob back to him, but Roach had overstepped.

And this seemed to strengthen Clarke’s resolve to be positive, as West Indies were forced to let slip their early advantage in helpful conditions Michael Clarke and Steven Smith added solidity to Australia’s batting, stitching an unbroken partnership of 75. They established their dominance over Kemar Roach, and left-arm spinner Veerasammy Permaul, against whom the two used their feet well. This was despite the hold the the dominance of Jerome Taylor, who did not give away a single run in the session, finishing with two wickets off six maiden overs.

The absence of Devendra Bishoo is already starting to hurt: the legspinner was omitted due to a finger injury, as West Indies made three changes to their line-up. Debutant Rajendra Chandrika was in for Marlon Samuels, who was suffering from an illness, and Roach was in for Shannon Gabriel. 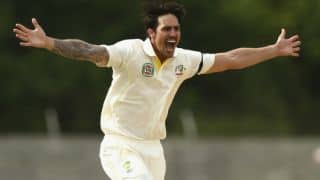 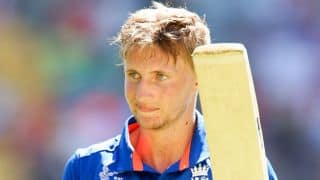