West Indies face Australia in the last leg of the group stage of the Tri-Nation series.

West Indies take on Australia at Barbados in a must win game for both the teams to qualify for the Tri-Nation series Final. The last game of the series was washed out with just one over being bowled between Australia and South Africa. West Indies have won two and lost two in the series, winning and losing one each against both the teams. On the other hand, Australia have had the same fate but have one abandoned game under their belt too.  A win for both the teams is a must to remain in contention for the final. Australia have a slightly unusual situation as it is their last group game and is more important than the hosts. LIVE CRICKET SCORECARD: West Indies vs Australia, 8th ODI at Barbados

Last time the two teams faced each other, West Indies surprised Australia to beat them by 4 wickets. Batting first, Australia posted a respectable total of 265 for 6. In reply, Marlon Samuels stood firm as he scored 92 and took his team to a famous win over the world champions. Australia know they have to be at their very best, which they have not been so far in the series, to enter the final. West Indies have one more game to go after this, against South Africa, but will like to bank upon the pressure mounting on the mighty Australians. If the hosts lose this game, they will have to win the other game by a bonus point against the Proteas. Live Blog: West Indies vs Australia, Tri-Nation Series 2016, Match 8 at Bridgetown, Barbados

Both the teams have all to play for in the tri-series which has set up nicely in its last leg in Kensington Oval, Bridgetown, Barbados. Australia will like their top-order to fire and not succumb in the last overs like they did in their previous encounter against the hosts while West Indies would like to be consistent, something they have not been in the entire tournament. 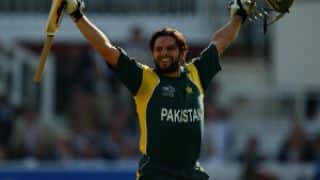