West Indies will hosts Australia for final of Tri-Nation Series 2016 on Sunday at Keningston Oval, Barbados.

After nine spectacular matches, hosts West Indies finally managed to seal their place in Tri-Nation Series 2016 final and are ready to clash against mighty Australia on Sunday at Keningston Oval. Out of the six games slotted for Australia and West Indies, both teams had a topsy-turvy campaign, winning three matches each. Until the last game against South Africa, West Indies’ chances of making it to the ultimate stage looked bleak. However, their all-round performance against the proteas ensured they lock horns with the mighty Aussies to lift the coveted trophy. Before heading for the final, here are the predictions and preview for both the teams: FULL CRICKET SCORECARD: West Indies vs Australia, Tri-Nation Series 2016 Final at Barbados

If looked closely, this year has belonged to the West Indies: Under 19 World Cup, ICC T20 World Cup, ICC T20 Women’s World Cup. This time, the hosts are prepared to earn a series to their name. Despite the absence of key players such as Dwayne Bravo, Chris Gayle and Darren Sammy, the hosts have shown grit and their combined efforts have paid off.

West Indies victory in this series has belonged to their middle-order. It started off with Kieron Pollard’s fiery cameo against South Africa. Darren Bravo’s century against South Africa, Marlon Samuels 134-ball 125 against Australia or Denesh Ramdin’s valuable contribution of 91 in the same game, the middle-order stepped at crucial junctures and took the team over the line. Nonetheless, opening pair Johnson Charles and Andre Fletcher are yet to go all guns blazing in this series.

As far as the bowling unit is concerned, debutant Shannon Gabriel has shone with his figures of 3 for 17 in just 5 overs against South Africa on Friday. Sunil Narine, who had lost the touch after his 6-wicket haul, was back in action bagging three wickets to restrict Proteas in the previous outing. West Indies’ all-rounder Carlos Brathwaite had his bit of share as well but needs to maintain his consistency. With Jerome Taylor missing out on action due to his poor performance, skipper Jason Holder will need to step up and get more wickets against a powerful batting line-up of Australia. ALSO READ: WI bowlers thrash SA; cruise to final of Tri-Nation Series 2016

Australia aim to remain at top and team analysis:

Australia were not only the champions of ICC World Cup 2015, but they continued their winning streak in ODI series against Ireland, England and India. They failed to create the mark against New Zealand, with the hosts taking lead by 2-1. They might not have been their best in ICC T20 World T20 216, but their overall performance in this series has shown their calibre in ODI cricket. They continue to rule the ODI rankings after garnering the victories in the recent past.

Absence of David Warner has been a huge blow for Australia’s batting unit, as most of Australia’s victories were dependent on his batting prowess. Yet the visitors have continued to showcase their batting talents in the form of Usman Khawaja, Aaron Finch, Steven Smith and the recent heroics by Glenn Maxwell who lead his team to the series final.

Australia’s bowling department seems settle; and with inclusion of Mitchell Starc, it has only boosted the pace unit. New comer Adam Zampa not only excelled in the recent IPL season, but continued his form for the national side as well. His figures of 3 for 16 against West Indies helped his side win the first game against the hosts. With the experience of Nathan Lyon, the spin combination can be heavy on hard-hitting Caribbean batsmen. Josh Hazlewood has also achieved accolades for his figure of 3 for 52 against Proteas. A lot of emphasis will be placed on James Faulkner who has managed to grab just three wickets so far in this series, while Mitchell Marsh is yet to revive his magic. With this balanced unit, West Indies would need to come up with something extraordinary.

The two teams met recently for The Frank Worrell Trophy Test series, which was a clean sweep for Australia. In 2012, when Australia toured West Indies, it was a draw. In the ODI series in 2013, the hosts outplayed the West Indies with straight wins. Australia have continued their dominance over West Indies at home as well as away whenever they have met in this format.

With Barbados equally favoring the batsmen and pacers, the spinners have task on hand. After reaching so far, Australia will hope for yet another clinical performance, while West Indies will want their hard work to pay off after winning by huge margin against South Africa in previous match. 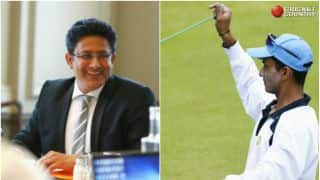 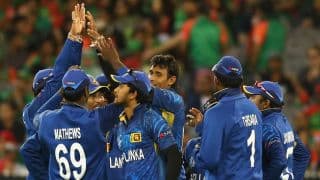