Gayle will miss the game and has been replaced in the squad by Guyana left-hander Leon Johnson.

The West Indies will hope to mark their 500th Test with a victory when they face Bangladesh in the second and final Test at the Beausejour Cricket Ground here Saturday. They swept aside the visitors by 10 wickets in the first encounter at Arnos Vale last week and with the added motivation of the historical landmark, will again fancy their chances of an equally dominant win.

West Indies played their first Test match against England at Lords in 1928, rising to the pinnacle of world cricket in the 1970s and 1980s. And though their star has long receded, the significance of the second Test is not lost on the side’s newest captain Denesh Ramdin. “This is a very special occasion — everyone is looking forward to it. This is very exciting. We will look to come out and give a good account our ourselves as we did in the last match in St Vincent so hopefully our bowlers can get the job done here and our batters can put runs on the board,” said Ramdin who replaced Darren Sammy at the helm last June.

“I am honoured, happy and privileged to be the man leading the team in this historic match. This is not just a special occasion for us as players but also for West Indians everywhere and West Indies fans and supporters worldwide.” He added: “This is something for us to cherish and celebrate and we will look to win and celebrate the match and the series. We want to pay tribute to all the great people who have contributed to the history and development of West Indies cricket so that helps to add to the special occasion.”

Occasion aside, the Windies will want to emphasise the gulf between the two teams by again winning handily. They batted once at Arnos Vale, compiling nearly 500 runs, but that was built upon 21-year-old opener Kraigg Brathwaite’s marathon career-best 212. Shivnarine Chanderpaul, Chris Gayle and Darren Bravo all got half-centuries against a Bangladeshi attack which lacked bite.

Gayle will miss the game as he deals with a personal matter and has been replaced in the squad by Guyana left-hander Leon Johnson. If he makes his debut, he will be the 300th Test player for the West Indies. The Windies will again brandish an attack laden with pace and with the pitch carrying grass, Ramdin is hoping his fast bowling trio of Kemar Roach, Jerome Taylor and Shannon Gabriel can exploit conditions.

“I believe it will have a lot more bounce,” the 29-year-old wicketkeeper said. “I’ve played a lot of matches here, first class matches and T20s, and a couple of 50-over matches and the ball has carried quite a lot throughout the innings so hopefully our faster bowlers can get the purchase here that they didn’t get in St. Vincent.”

With tough assignments in India and South Africa ahead later this year, Ramdin knows the importance of stacking up victories now to create momentum. He’s also still waiting for his first series win having conceded the three-Test rubber to New Zealand back in June, and says the historic moment presents the ideal opportunity. 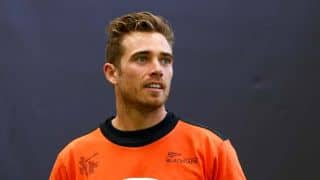