Bangladesh were left stranded on 268 for six after their 50 overs as West Indies held on for a three-run win.

Shimron Hetmyer scored a superb century as Bangladesh stumbled in the final over to hand the West Indies a series-levelling victory in their one-day game here Wednesday.The hosts made it 1-1 in the best-of-three series after Bangladesh failed to score eight runs off their final over for what would have been a series win. Shimron Hetmyer blazed 125 off 93 balls to pace the home side to a competitive 271 all out batting first.

Bangladesh were left stranded on 268 for six after their 50 overs as West Indies held on for a three-run win. West Indies captain Jason Holder, who started the innings by conceding 20 runs and whose final analysis of one for 66 was the most expensive ever by a Caribbean bowler in an ODI against Bangladesh, bowled the 50th over to give the hosts the victory.

Holder’s first delivery accounted for topscorer Mushfiqur Rahim for 68 via a catch on the midwicket boundary and he conceded just four runs off the remaining five deliveries to celebrate a result with his teammates which leaves the series to be decided in the final match on Saturday in St Kitts. “We just had to hang in there and believe in ourselves,” said the delighted captain after the match.

“Bangladesh came at us hard and credit to them for the way they batted at the top. But we didn t give up and it really sets things up for the final match.” Yet it should never have come to the final over drama, especially after the flying start in which Bangladesh raced to their fastest-ever fifty in ODIs off 4.4 overs and were 71 for one by the seventh over and apparently cruising.

However both Tamim Iqbal (54) and Shakib al Hasan (56) fell to careless shots to spinners Devendra Bishoo and Ashley Nurse respectively to get the West Indies back into the fray. Mushfiqur and Mahmudullah, who contributed 39, then featured in an 87-run fourth-wicket stand that looked to have tilted the balance decisively Bangladesh s way.

There were more twists to come though as Mahmudullah was run out at the start of the 46th over at 232 for four, which opened the door to a West Indies team who appeared to have been closed out from the contest just minutes earlier.

It was a game we should have won but we made too many mistakes at the end,” said Bangladesh captain Mashrafe Mortaza. “We weren t at our best in the field either but the series is still alive and we believe we have what it takes to win it.” 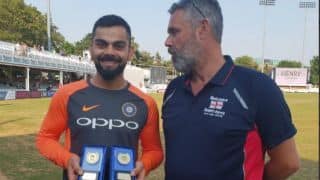