Kraigg Brathwaite and Leon Johnson got fifties to put West Indies on top.

West Indies were 232 for three against Bangladesh at stumps on Day One of the second Test at St. Kitts thanks to openers Leon Johnson and Kraigg Brathwaite, each of whom scored a fine fifty. Darren Bravo and Shivnarine Chanderpaul took West Indies to a commanding position by Stumps.

Openers Kraigg Brathwaite and Leon Johnson, making his debut after Chris Gayle opted out of the Test, started sedately. Neither man was willing to chance his arm; it seemed that West Indies celebrating their 500th Test would not watch a Desmond Haynes-Gordon Greenidge type start to their innings. In their defence, both Brathwaite and Johnson were sound in technique and in temperament. They got to lunch unconquered.

After Tea, it seemed that Edwards had gone into a shell. The erstwhile powerful batsman scratched about for 52 balls before driving one from Mahmudullah to covers, where Shamsur Rahman took a good diving catch. Edwards could make only 16. Bravo meanwhile was looking in terrific nick, getting 20 off 30 balls before Edwards’ dismissal. After that though, he went into a shell of his own, before picking up his scoring rate at the end of the day. Shivnarine Chanderpaul seemed like he was not scoring any runs, but almost seemed to creep up remain unconcquered on 34 at the end of the day.

Earlier, Bangladesh skipper Mushfiqur Rahim won the toss and opted to bowl first. The wicket didn’t have very much on offer, and the Bangladeshi bowlers were unable to extract anything much from the surface thanks to some wayward bowling. 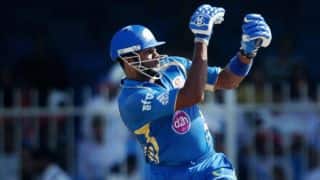 Kieron Pollard: Pressure is on us being CLT20 defending champions