West Indies will start day three of second Test against Bangladesh from a commanding position.

West Indies will start day three of the second Test against Bangladesh from a commanding position at St. Lucia on Monday. They have reduced the visiting side to 104 for seven at the end of day two. Kemar Roach‘s fifer and Jerome Taylor‘s brace helped them achieve this feat. Bangladesh will look too score as many runs as they in order to close in on West Indies’s total. Catch the live scorecard of the match here

Earlier on day three, They kept up their good showing in the post-lunch session as well, with both batsmen getting solid half-centuries. However, they were dismissed in quick succession at the stroke of Tea for near identical scores. Johnson impressed on debut for his 66 off 162 deliveries, while Brathwaite seemed to continue from where he left off in the previous game, getting 63 off 153 balls. The two wicket-takers for Bangladesh were Taijul Islam and Shafiul Islam. Kirk Edwards was dropped early on in his innings, but barring the one blemish, he and Darren Bravo went to Tea unscathed. Catch the live blog of the match here

After Tea, it seemed that Edwards had gone into a shell. The erstwhile powerful batsman scratched about for 52 balls before driving one from Mahmudullah to covers, where Shamsur Rahman took a good diving catch. Edwards could make only 16. Bravo meanwhile was looking in terrific nick, getting 20 off 30 balls before Edwards’ dismissal. After that though, he went into a shell of his own, before picking up his scoring rate at the end of the day. Shivnarine Chanderpaul seemed like he was not scoring any runs, but almost seemed to creep up remain unconcquered on 34 at the end of the day. Watch the live coverage of 2nd days play in Ten Cricket. 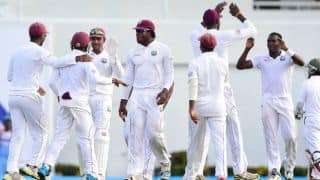