Catch live updates of the first Test between Bangladesh and West Indies at St Vincent.

By Amit Banerjee and Sandipan Banerjee

(Bangladesh take on West Indies in the first Test of Bangladesh’s tour of West Indies. Catch live cricket scores and updates of the match here)

West Indies finish day one of first Test against Bangladesh at 284/3. Here is the day report http://t.co/XCbHHqcakv. #wivban

West Indies 264/3 I Overs 87
Kraigg Brathwaite 124 (269) Shivnarine Chanderpaul 1 (11)
Stumps on day one!! No more play possible for today. Kraigg Brathwaite walked off to a well deserved ovation from the dressing room, he made his 2nd Test hundred, both in this season. He shared century stands with Chris Gayle (64) and Darren Bravo (62) to put the hosts in a commanding situation. Debutants, Shuvagata Hom and Taijul Islam bowled their hearts out and shared all the wickets to fall. Bangladesh will be disappointed though, particularly after having asked West Indies to bat first, and ending the day with just 3 wickets.
West Indies 264/3 I Overs 87
Kraigg Brathwaite 124 (269) Shivnarine Chanderpaul 1 (11)
The umpires have it enough now. off they go. This might well be the last bit of action for the day. Another 30 minutes were scheduled but Bangladesh did well to reel in 87 overs for the day. The umpires had a discussion but decide to continue.. The ground-staff are ready and it looks like it might pour down any time.
West Indies 263/3 I Overs 84.3
Kraigg Brathwaite 122 (263)
Out! Bravo gone, Caught by Mahmudullah!! Imperiosity has got the better of Bravo. This was tossed up once again by Islam, inviting Bravo to have a go at that, he obliges and looks to clear mid-off, the bat turned in his hands and he ends up offering a simple catch to Mahmudullah at mid-off. Chanderpaul is the new man in.
Darren Bravo c Mahmudullah b T Islam 62(126)

Time for Bangladesh to justify the tag of ‘Test playing nation’. Here is the report. http://t.co/JLHzGFVEKN #WIvBan #cricket

West Indies 207/2 I Overs 68
Darren Bravo 26 (66), Kraigg Brathwaite 104 (224)
Kraigg Brathwaite has his second Test hundred. Great patience, impeccable composure. He showed excellent temperament. He is having a good year. His first hundred also came this year against New Zealand.
West Indies 133/2 I Overs 43
Darren Bravo 0 (4), Kraigg Brathwaite 57 (136)
Bangladesh have struck again. Tajiul Islam makes the dismissal of Kirk Edwards. Today was certainly not his day. Bangladesh have recovered beautifully in this session.
OUT! Kirk Edwards c Haque b Islam 10 (14)
West Indies 116/1 I Overs 39.1
Kirk Edwards 0 (0), Kraigg Brathwaite 50 (131)
Chris Gayle is gone! The umpire gave it not out, but the Bangladeshis reviewed it and the decision was overturned. Shuvagata Hom who is making his Test debut took the wicket.
OUT! Chris Gayle lbw Hom 64 (105)
West Indies 115/0 I Overs 38
Chris Gayle 63 (103), Kraigg Brathwaite 50 (126)
The Bangladeshi bowlers have definitely managed to put a lid on the scoring rate, but they have still not managed to take a wicket. Gayle and Braithwaite have been calm, and look content in slowly frustrating the bowlers.
West Indies 103/0 I Overs 29
Chris Gayle 61 (81), Kraigg Brathwaite 40 (92)
The umpires have called for Lunch on Day 1 as the hosts look strong with 103 runs on the board without the loss of a single wicket so far. Gayle and Brathwaite will look to keep the runs flowing to move towards a big total, while the Bangladeshis will be praying for a dismissal in the second session of play.
West Indies 86/0 I Overs 25
Chris Gayle 52 (68), Kraigg Brathwaite 32 (83)
Bangladeshi skipper Mushfiqur Rahim has used five bowlers so far, but to no avail. The West Indian openers in the meanwhile continue to make merry at the centre as the partnership is now worth 86 runs.
West Indies 68/0 I Overs 20
C Gayle 38 (54), K Brathwaite 29 (66)
The partnership is getting more firm with each passing minute, with the stand nearing the century mark. Gayle meanwhile nears his 37th Test fifty.

West Indies 35/0 I Overs 10
Chris Gayle 20 (33), K Brathwaite 15 (27)
The West Indians are going at a steady pace, though four more boundaries have been scored since the fifth over.

The West Indians are off to a slow start, with Gayle hitting two consecutive boundaries off the fourth over of Rubel Hossain

West Indies 0/0 I Overs 0
Chris Gayle 0(0), Kraigg Brathwaite 0(0)
The West Indian openers walk out to bat along with the Bangladeshi players. Al-Amin Hossain will open the bowling for the visitors.

Toss: Bangladesh have won the toss and have elected to field.  Taijul Islam and Shuvagata Hom are set to make their Test debuts for Bangladesh. Shannon Gabriel on the other hand has been inducted into the squad in place of Jason Holder.

Hello and welcome to CricketCountry’s coverage of the first Test match between West Indies and Bangladesh at St Vincent. This is Amit Banerjee, and I will be bringing you the live updates of the match.

After their clean sweep of three match one-day series, the hosts are heavily favoured to dictate terms in the white jersey as well. On the other hand, it’s high time for the Bangladesh to justify their tag of a “Test playing nation”. Apart from few over enthusiastic Bangladeshi fans, no one is expecting Bangladesh to win this series. But what Mushfiqur Rahim’s team need to do, is to show some character and produce some noticeable performances in these two Test matches.

Five years ago, when Bangladesh last played a Test series in this part of the world, they achieved a historic triumph by defeating a depleted West Indies team. 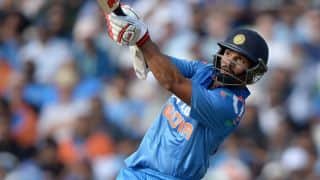