(Bangladesh take on West Indies in the first Test of Bangladesh’s tour of West Indies. Catch live cricket scores and updates of the match here)

It’s all over here at St.Vincent’s. West Indies comprehensively beat Bangladesh by 10 wickets!

That’s it for Bangladesh. They managed to get a lead of only 12 runs!

Bangladesh 298 / 9 | Overs 108
Mushfiqur Rahim 100 (222), Al-Amin Hossain 0 (0)
It’s all over for Bangladesh in spite of a brilliant fight from the visitor skipper Mushfiqur Rahim. He brought up his century in style.

Hello I am Rajarshi Majumdar and welcome to CricketCountry’s live blog of the final day’s play between West Indies and Bangladesh at St Vincent on Tuesday. On the fourth day of the opening Test, Mushfiqur Rahim rode his luck and battled through the pain of a badly bruised finger in compiling an unbeaten 70 to keep Bangladesh alive at 256 for five, AFP reported.

Following-on 302 runs behind the home side’s first innings total of 484 for seven declared, the tourists go into the final day still needing another 46 runs to make the Caribbean team bat again with five wickets in hand.

Reduced to 110 for four at the lunch interval despite a typically attacking 53 by opening batsman Tamim Iqbal, Bangladesh looked doomed to a massive innings defeat inside four days before Mushfiqur and Mahmudullah (66) came together in a partnership that realised 130 runs for the fifth wicket and frustrated the West Indies for over three hours.

That frustration intensified to exasperation as chance after chance was put down through the afternoon.

Mushfiqur was dropped twice in the slips off the fast bowlers while Mahmudullah offered a sharp chance to specialist spinner Sulieman Benn before part-time bowler Chris Gayle lured him into a miscued swipe to extra-cover where Kirk Edwards spilled the simplest of catches. 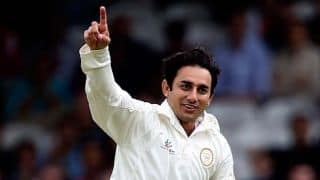 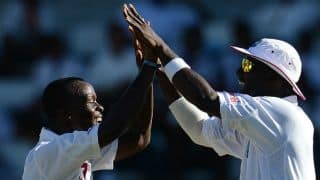