Catch Live Updates of the 1st Day of the second Test between Bangladesh and West Indies here.

(Bangladesh take on West Indies in the second Test of Bangladesh’s tour of West Indies.Catch live cricket scores and updates of the match here)

So after  a day of slightly dull cricket, West Indies have ambled into the driver’s seat. Bangladesh aren’t yet out of things though, and if they manage a few early wickets tomorrow morning, things will be quite different.

Hard to believe but Darren Bravo was on 20 off 30 balls at one point. In his next 55-odd balls he has made 14. The on-air commentators are wondering about West Indies’ tactics. Chanderpaul has picked up his scoring rate in the last couple of overs. He stepped out to Taijul Islam and smacked him for a boundary, which was a bolt from the blue. And the second new ball has finally been taken.

Not much happening at the moment. Chanderpaul edged one bus was dropped in the slips, and since then Bravo and Chanderpaul have continued to grind away. Al-Amin continues to bowl his heart out. Things are more or less in a stalemate at the moment, but all the hard work put in by the West Indian openers mean that at the end of the day West Indies are head. Still around 10-15 overs left in the day though, and anything can happen. Second new ball due in two overs.

After Edwards’ dismissal Bravo has become far more sedate. Chanderpaul has looked unshakable as well. Not too many runs scored for the last five overs, but West Indies are in firm control of this match. The Bangladeshi bowlers will be hoping for a quick breakthrough lest they get ground into the dust even more.

Bravo continues to look good, and now even Edwards looking to take a few runs rather than just stonewall everything. Mahmudullah comes on now. AND HE STRIKES! Flighted on off, Edwards goes for the drive and Shamsur dives to catch it at covers!

Kirk Edwards is struggling here, he has not looked in any sort of form. Bravo at the other end is stroking the ball well and timing the ball beautifully. Edwards though seems to be in a shell. He has not been able to dominate the bowlers in the slightest.

So after a very good opening partnership, two new batsmen are at the crease. Kirk Edwards has been short of form recently, while Darren Bravo scored some runs in the last game. Both these batsmen would like to see West Indies through till the end of the session. And they have. So it’s Tea on Day One, with West Indies firmly ahead. A few wickets could turn the tide though. Bangladesh have a good opportunity to turn things around after the break.
West Indies 145 / 2 | Overs 53
Kirk Edwards 0 (1), Darren Bravo 0 (0)
Both the openers are back in the pavilion. It struck him in front of the wickets he thought of reviewing, which he did but the ball struck him in line. A good innings comes to an end.
OUT! Leon Johnson lbw Taijul 65 (158)
West Indies 143 / 1 | Overs 51
Leon Johnson 65 (158), Kirk Edwards 0 (1)
Braithwaite dismissed. It was a short, wide ball and Brathwaite reached for this, didn’t get over the bounce, and scooped a simple catch to the man at point.
OUT! Kraigg Braithwaite c Tajiul b Shaiful 63 (150)
West Indies 118 / 0 | Overs 44
Kraigg Brathwaite 54 (130), Leon Johnson 50 (137)
Fifty up for Leon Johnson. This new kid has shown a lot of promise. Braithwaite continues to impress with his form. He too got his half-century. Both these batsmen have played well. It has been a good partnership.
West Indies 101 / 0 | Overs 39
Kraigg Brathwaite 42 (115), Leon Johnson 45 (122)
And the hundred partnership comes up for the Braithwaite and Johnson. Johnson brought up this with a beautifully lofted six over the long off. Taijul Islam pitched the ball at the wrong length and Johnson danced down the pitch and lofted it over the long on. Both these batsmen are looking in good touch now.
West Indies 93 / 0 | Overs 37
Kraigg Brathwaite 41 (110), Leon Johnson 38 (115)
The post lunch session has begun. The West Indies openers are looking to score quickly now. Braithwaite all of a sudden have gone past his partner Johnson at the other end. Bangladesh still struggling to pick up a wicket.
West Indies 57 / 0 | Overs 25
Kraigg Brathwaite 16 (75), Leon Johnson 27 (78)
Things have become really slow for West Indies. The Bangladeshi bowlers are bowling well. Al-Amin Hossain has just given away 13 runs in his 10 overs. The bowlers are bowling good line and length. Few more overs left before the umpires call for lunch. Bangladesh need to break this partnership in order to make some impact in this match.
West Indies 46 / 0 | Overs 18
Kraigg Brathwaite 12 (59), Leon Johnson 21 (51)
Braithwaite and Johnson are watching the ball well and timing it to perfection. None of the Bangladeshi bowlers have had much of an impact on these two batsmen. It’s all easy for West Indies at this moment.
West Indies 20/0 | Overs 9
Kraigg Brathwaite 9 (30), Leon Johnson 4 (25)
West Indies have made a steady start to their innings. Not many boundaries have come, but wickets too haven’t fallen. Leon Johnson is opening the batting in the absence of Chris Gayle who has opted out due to personal reasons.
Playing XI:
West Indies: Kraigg Braithwaite, Leon Johnson, Kirk Edwards, Darren Bravo, Jermaine Blackwood, Shivnarine Chanderpaul, Denesh Ramdin (c & wk), Jerome Taylor, Kemar Roach, Suleiman Benn, Shannon Gabriel
Bangladesh: Tamim Iqbal, Shamsur Rahman, Anamul Haque, Mominul Haque, Mahmudullah, Mushfiqur Rahim (c & wk), Nasir Hossain, Shafiul Islam, Taijul Islam, Al-Amin Hossain, Robiul Islam

West Indies romped through against Bangladesh in the first Test, winning by 10 wickets after a brilliant double hundred from Kraigg Brathwaite and fifties from Chris Gayle, Darren Bravo and Shivnarine Chanderpaul ground the Bangladeshi bowling to a pulp.

Taijul Islam took a five-wicket haul on debut, including the big breaks of Brathwaite, Darren Bravo, Denesh Ramdin, and Kirk Edwards. Taijul continues Bangladesh’s impressive tradition of producing good left-arm spinners. None of the other bowlers had much luck though, and the West Indians made merry on a pitch with no real demons.

In reply, Bangladesh folded for 182 and 314 respectively. Bangladesh’s old nemeses Sulieman Benn and Kemar Roach were the wreckers-in-chief, snaring seven and five wickets in the match respectively. Mushfiqur Rahim was undoubtedly the batsman of the match for Bangladesh, scoring an unbeaten 48 in the first innings and a resolute 116 in the second. However, none of the other Bangladeshi batsmen really came to terms with proceedings. 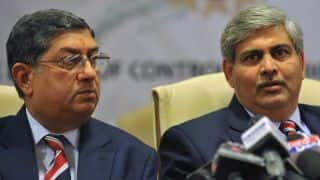