West Indies have not won a single bilateral ODI series against England in this century. Their last home series win versus the visitors came in 1997-98.

The last time West Indies and England met each other was 333 days ago. 334 if you include today (match day). In these 333 days, a lot has changed for both sides. They played various games, new players emerged, and some old ones faded. Both teams displayed some outstanding performances or cascaded like a pack of cards sometimes. But despite all this, when West Indies will take on England at the Sir Vivian Richards Stadium in the first One-Day International (ODI), eyes will be set on two players; those two players who were the highlight of the ICC World Twenty20 2016 final in Kolkata Carlos Brathwaite and Ben Stokes. Fair enough chances stand that these two will face each other the same way they did 333 days ago. FULL CRICKET SCORECARD: West Indies vs England, 1st ODI at Antigua

But as I mentioned earlier, fortunes have changed for these two players. Braithwaite s life changed with those 4 deliveries, becoming the T20I captain; whereas Stokes became an overnight millionaire a few weeks ago along with the promotion to the vice-captaincy of the Test team riding on consistent performance.

Stokes wins the game here, but the demons of the past may haunt him again at Antigua.

Now getting to the team perspective, England would be itching to get their ODI game back on track. Moreover, the priority would be to set things right for ICC Champions Trophy 2017 in June. The English side had a see-saw kind of ODI series. The recent one in and against India, where they endured 1-2 defeat; salvaging a victory in the final game as a consolation!

Prior to this, they played ODI series in and against Bangladesh which they won 2-1 quite in a not-so-welcome manner. To be precise, away from home, England won 3 out of total 6!

Before these foreign tours, England played like home giants. They won 3-0 against Sri Lanka and 4-1 against Pakistan. Their home record in these 333 days has been phenomenal, winning 7 0ut of 10, losing one while rest 2 yielded no result. But their away record contrasts all these victories, despite the series win against Bangladesh.

Here too, they play away from home, but the startling point for the English side is, that they have got exceptional talent in these away defeats. Stokes, Chris Woakes, Jason Roy, Alex Hales, Ben Duckett, Jos Buttler, Eoin Morgan and the list goes on. But England squad may have felt the comparative lacking in their bowling lineup against India. Despite this, probably they are the regarded as best ODI line up in the current cricketing world!

England will enter Antigua in the absence of David Willey and Jake Ball, the latter of who looked promising against India. These untimely injuries have forced the Three-Lions to opt for Liam Plunkett, Steven Finn and Tom Curran the South Africa-born pacer from Surrey. Moeen Ali and Adil Rashid, the twin-spin pillars will have to jump in here to fill in the boots for the absentees, though.

But will they outperform West Indies, the Caribbean Kings in their den?

West Indies have a lot of work to do in this ODI series. In these 333 days which passed by, West Indies played 13 ODI games. These 13 include 7 at home out of which they won 3 in the Tri Series comprising of Australia and South Africa, which they subsequently lost to Australia in final.

The away record is alarming, though. Out of the other 6, they were drubbed 0-3 by Pakistan in UAE and managed to win just 1 and one was rain-abandoned in the Tri-Series against Zimbabwe and Sri Lanka in Zimbabwe.

Woes turned to misery for them when they failed to qualify for Champions Trophy 2017 being placed 9th as on September 30th in ICC ODI Team rankings. But they should be eying for a win here with prospects of ICC 2019 World Cup; because if they continue to show the same paltry form, their direct qualification goes for a toss starting from this series. With respect to the 50-over World Cup, the make it or break it situation starts for hosts along with this ODI series.

Batting wise, West Indies have some power-packed batters. More explosive than England, but still West Indies fall many paces behind due to lack of experience. Evin Lewis, Kraigg Brathwaite, Shai Hope, Rovman Powell, who form the batting top-order have all played less than 10 ODIs each. This ultimately means Kieran Powell, Carlos Brathwaite and skipper Jason Holder will have to soak the pressure if these aforementioned come down like a pack of cards.

Devendra Bishoo and Ashley Nurse are the keys to West Indian spin attack and their spells will be very important with respect to the end result as the wicket is likely to assist.

Stoke and Brathwaite of course.

But will England s middle-order be okay playing against the Caribbean spin attack, because they faltered in the second practice game managing an escaping victory by 2 wickets. So again, Bishoo and Nurse are likely to do the damage here.

West Indian wickets have become slow in the recent times and can get more sluggish in the second innings. But if any batsman sets his eye, he might just pull it off.

There have been 36 ODIs between West Indies and England in the Caribbean so far. West Indies have won 21 of them, lost 12 and rest of the three ended with no result.

But these numbers does not give the reality of current West Indies team. But still can be worth enough to pump up their confidence.

But, West Indies have not won a single bilateral ODI series over England in this century. Their last ODI series win at home against England came in 1997-98.

Taking all this into consideration simply one cannot write-off the current Caribbean side despite their poor performances in these 333 days. The tricky thing is, they are playing at home and yet they will be considered underdogs.

But again, underdogs often have the last laugh. 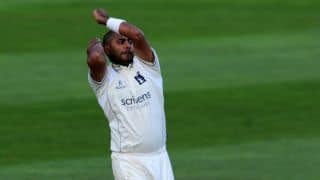