England will look to wrap up the series with a win at Barbados.

West Indies will want to win and level the series but it will not be that easy as England are high on confidence after their emphatic win in the previous match. Skipper Alastair Cook led from the front and scored half-centuries in both innings and guided his team home in the second innings. Joe Root scored a magnificent unbeaten 182 in the first innings that gave England a first innings lead. Kraigg Brathwaite too scored an excellent innings  for West Indies and will hope to come good in this game as well. LIVE SCORECARD: WEST INDIES vs ENGLAND

Devendra Bishoo picked up an injury the previous match and Veerasammy Permaul has been called up as his back-up. West Indies will hope to have the services of their strike bowler Jerome Taylor, who missed the previous Test due injury. West Indies need to find consistency, says coach Phil Simmons

Slowly but surely the concept of live streaming is capturing the imagination of the internet. Such fans that do not have access to televisions search the internet frenetically for websites on which they can watch their favourite teams in acti0n. Live Streaming is catching up a huge trend in the internet users in India and other parts of the world. Joe Root ‘ideal’ to captain England, believes Martyn Moxon 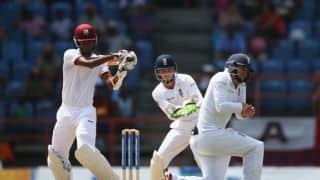