West Indies finished Day Two of the first Test against England at Antigua at 155 for four with Shivnarine Chanderpaul and Jermaine Blackwood batting for them after a mid-stutter. Every time West Indies looked good for a big stand, England scalped a wicket and pushed them back. The Windies though have avoided the follow-on mark and will hope to get going on Wednesday. Live Scorecard: England tour of West Indies 2015, 1st Test at Antigua Day Three

West Indies lost Devon Smith early but Craig Brathwaite was cautious and played out the new ball. But when Chris Jordan took a blinder at first slip to dismiss the opener, it looked like West Indies would fall away but the pair of Blackwood and Chanderpaul saw through the day for them without any more hiccups. Blackwood though had luck with him when he edged one to Alastair Cook but Ben Stokes, the bowler had overstepped. England will hope to do better and run through the Windies batting line-up. Live Updates: England tour of West Indies 2015, 1st Test at Antigua Day Three

England earlier in the day collapsed from 341 for five to get bowled out for 399. The Windies bowlers bowled with good pace and got rich rewards in the first session yesterday. Kemar Roach with four for 90 was the pick of the bowlers for Windies. England will be disappointed with their effort with the bat at the start of the second day.

West Indies restrict England to 399 in 1st Test at Antigua. 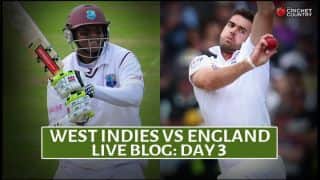