England will aim to extend their lead past 350 when they resume their second innings at 116 for three on the fourth day.

England will aim to extend their lead past 350 when they resume their second innings at 116 for three on the fourth day of their opening Test against the West Indies at North Sound in Antigua. Catch the live scorecard and ball-by-ball commentary of the first Test between England and West Indies Day 4 here

If England manage to extend their lead up to 350 or take it even beyond that, the tourists will be chuffed up with their opportunity of winning this Test and take a strong 1-0 lead in the three-match Test series.

Joe Root andGary Ballance were unbeaten as they had added 64 runs for the fourth wicket to keep England afloat, after they had lost early wickets in form of Alastair Cook, Jonathan Trott and Ian Bell. While Cook and Trott fell to the brilliance of Jerome Taylor, Bell was run out for 11 which put England in pressure late on Day Three.

Root was batting on 32 off 45 balls, having hit two boundaries and one six. On the other hand, Ballance, coming off from a poor run which hounded England for a long time, dug in to score 44 not out off 113 balls with the help of five boundaries.

In Photos: West Indies vs England 2015 1st Test at Antigua 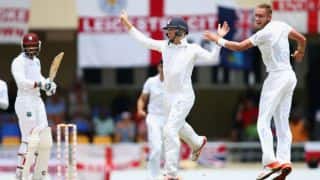