England will resume their first innings at 373 for six, having taken their lead to 74 runs by the end of the third day.

England will resume their first innings at 373 for six, having taken their lead to 74 runs by the end of the third day at St George’s Stadium in Grenada, against the West Indies. Joe Root scores century as England finish Day 3 at 373/6, lead West Indies by 74 runs in 2nd Test at Grenada

England took lead in the first innings riding on a strong start provided by their openers Alastair Cook and Jonathan Trott, as they were able to reply to the West Indies’ total of 299 runs in a commanding manner. England did struggle in their reply as their lower middle-order failed on the third day. West Indies vs England, 2nd Test at Grenada: Marlon Samuels gives Ben Stokes a funny send-off

However, a superb unbeaten century by their in-form batsman Joe Root helped England take the crucial lead in the first innings. Root was unbeaten on 118 at stumps on Day Three, having faced 165 balls and striking 13 boundaries and two sixes. LIVE CRICKET SCORECARD: West Indies vs England 2nd Test Day 4 at Grenada here

For the West Indies, Shannon Gabriel and the spinner Devendra Bishoo have been the pick among the bowlers with both bagging two wickets each. It will be crucial for the hosts to not let England take their lead in excess of 150, or else things will be very difficult for them. LIVE CRICKET UPDATES AND COMMENTARY: West Indies vs England 2nd Test, Day 4 at Grenada 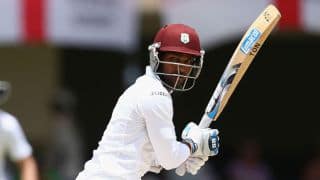