Kraigg Brathwaite’s unbeaten 101 anchored a determined West Indies second innings as the home side reached 202 for two at stumps on the fourth day of the second Test against England on Friday. Trailing on first innings by 165 runs after the tourists were dismissed for 464 in the morning session, the home side go into the final day’s play ahead by just 37 runs with eight wickets in hand. Live Scorecard: West Indies vs England, second Test Day Five

First innings centurion Marlon Samuels, who generated considerable media attention for his saluting send-off of all-rounder Ben Stokes following his dismissal late on the third day, will resume on the last morning on 22 alongside Brathwaite. Known for his stodgy defiance, Brathwaite actually outscored the more flamboyant Darren Bravo for much of their 142-run second-wicket partnership. READ: Kraigg Brathwaite urges West Indies to stay focused in the final day

However he returned to his cocoon of circumspection after the left-hander fell for 69 to a catch at the wicket off fast bowler Stuart Broad in the final session. With Samuels calm and composed at the other end, the 22-year-old Barbadian duly completed his fourth Test hundred in the last nine matches, forcing seamer James Anderson through the off-side in the penultimate over of the day to reach the milestone off 228 deliveries with 11 fours, AFP reports. Live Updates: West Indies vs England, second Test, Day Five here 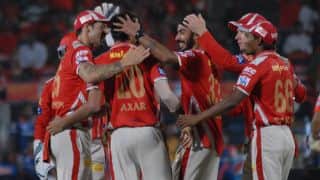