A record chase in the first ODI underlined England‘s status as the No 1 team – and potential 2019 ICC Cricket World Cup winners – and with just a day between matches, hosts West Indies have hardly had time to recover. The second match of the five-ODI takes place at the same venue, Kensington Oval, on Friday.

Centuries to Jason Roy and Joe Root helped England complete their highest ODI chase on Wednesday, the visitors cruising to a target of 361 with eight balls to spare in Barbados. The skipper Eoin Morgan made 65 and Jos Buttler completed the win after Root was out for 102 with the scores level.

Chris Gayle earlier made 135 to help West Indies post 360/8, hitting 12 of West Indies’ 23 sixes – a record for an ODI innings – to set up their highest total against England. (READ: Gayle breaks Afridi s record for most sixes in international cricket)

However, Roy – dropped on 9 by Gayle – set the tone for England’s win. The chase surpassed the 350/3 that England made versus New Zealand in 2015, thus making it the fourth-highest chase by any team. (READ: England were never under pressure chasing 361: Eoin Morgan)

The Kensington Oval surface had nothing in it for the bowlers, but West Indies were sloppy in letting Roy off five times and Root once.

A duck for Nicholas Pooran could see West Indies add a bowling option in Fabien Allen. Devendra Bishoo could make way for a pace bowler.

Going for 54 runs in six wicketless overs could see Liam Plunkett lose his place to Tom Curran, while David Willey may replace Chris Woakes as England seek to manage his knee problem.

Plunkett and Woakes are tied on 115 ODI wickets. A wicket to either will move them past Phil de Freitas at No 7 in England’s all-time table.

Gayle needs 193 runs to reach 10,000 in ODIs. Only Brian Lara has crossed that mark for West Indies.

West Indies’ 360 and England’s 364 are the highest totals at Kensington Oval.

“We’ve got to be a bit better in the field. I felt the energy and body language could have been a lot better. That would give the bowlers some momentum to work with.” – Jason Holder

“People will forget Joe Root scored a hundred there, he made it look very easy, but we’re so fortunate to have a guy like that who can be our rock. And he’s no slouch.” – Eoin Morgan 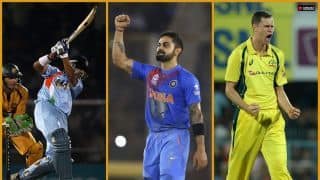