West Indies are boosted by the return of Andre Russell for his first ODI in eight months.

A wash out in Grenada on Monday has turned the fourth ODI at the same venue today into a massive game. The winner will have an unassailable lead in the five-match series, which will then make the last game in St Lucia a must-win for the team trailing.

England, ranked No 1 in ODIs, were stung by defeat to West Indies in the second game after a record chase in the series opener. On a run of nine bilateral ODI series victories in a row, Eoin Morgan’s team will be desperate to address the weaknesses of the last defeat given their approach to ODI cricket.

West Indies have not won back-to-back ODIs against England since March 2009 and with Andre Russell back in their squad, have a bit of added firepower as they seek a series lead. (READ: My game’s in pretty good order right now: Joe Root)

The hosts named an unchanged XI for the washed out ODI and handed a 100th cap to Darren Bravo. But with Russell back, he will in all likelihood slot back. This would push Carlos Brathwaite out of West Indies’ XI. Russell may not bowl, however, given his knee worries.

Ben Stokes missed the last game after rolling his ankle in training and was replaced by Alex Hales, while Chris Woakes regained his spot from Tom Curran. The same XI is likely to be replicated.

St George s has only seen 300 scored thrice in 22 ODIs, so it is not necessarily a high-scoring venue. Spinners have done well there, which indicates a somewhat sluggish track. Conditions are mostly clear though scattered showers are expected.

Chris Gayle is the second-highest wicket-taker at St George s with 12 wickets from 10 ODIs.

Shimron Hetmyer has scored four centuries in 22 ODIs. No West Indies batsman had made as many in so few games.

“We know Windies will cause us problems – we managed to win the first game but they rightly won the second one. We were by no means complacent but it is good to have that reminder every now and again that you have to put in the hard yards to win matches at international level.” – Woakes

“I know the right West Indies combination with a fully focussed side can beat anyone on their day.” – Richard Pybus, West Indies coach 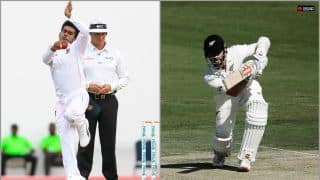