But who England would need to drop is not so straightforward, feels the former skipper.

Former England captain Nasser Hussain has not ruled out the tourists fielding two spinners in the first Test versus West Indies starting Wednesday at Kensington Oval, a venue where pace has dominated down the years.

Writing in his column for Sky Sports, Hussain felt that preconceptions of one spinner being the norm were misplaced.

“History tells you here in Barbados that in general seamers rule over the spinners, spin doesn’t have much of a threat, and there is usually a good covering of grass. Some great fast bowlers have been produced at this wonderful cricket stadium,” wrote the 50-year-old. “England would have done their stats and going into this game would have thought ‘we are going to play one spinner, go into an English plan and play all our seamers’. (ALSO READ: Moeen Ali braced to be England’s sole spinner in first Test)

“However, when you get to the ground it looks a fairly ugly pitch, it looks patchy, dry and we’re two days out so it is obviously only going to get drier. You would think looking at it without any statistics you would need two spinners on there, but how you get them in is the real question.”

In Sri Lanka, England banked heavily on spin and the results of playing Moeen Ali and Jack Leach in tandem were 18 wickets to each during the landmark 3-0 sweep. But with conditions different in the Caribbean, Hussain pondered the combination England could go with. (ALSO READ: England seamers can have big role in West Indies: James Anderson)

“On the last tour you’re looking for reverse swing, using a lot of spin options, your seamers don’t have much of a role to play after 40 overs. This Dukes ball is hard, it will swing for a lot longer and the outfield is pretty green. This ball will do a lot, as we have seen in the warm-up matches, for a lot longer,” he wrote. “That plays into hands of Stuart Broad and Sam Curran because if you play the extra spinner, unless you’re leaving a batter out, you’re going to have to leave one of those big seamers out.

“The real test for Joe Root is not why he should leave people out, it is who is he brave enough to leave out. The problem with horses for courses is that they have all done well on their courses – now who does he leave out because someone is going to be really unlucky.” 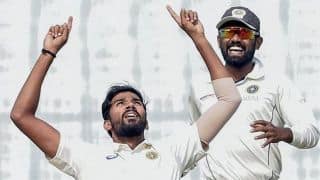