Gayle threatened to take Windies to their target of 419 after hitting 162 from 97 balls.

Chris Gayle on Wednesday ended up second best to Jos Buttler as England edged a high-scoring fourth ODI in Grenada by 29 runs, and after the loss he praised the English wicketkeeper-batsman for his batting – but in his own inimitable style.

West Indies, chasing a target of 419, lost four wickets in the 48th over without a run scored to be 389 all out. Gayle kept them in the hunt with 162 off 97 balls, smacking 11 fours and 14 sixes. (READ: Jos Buttler a ‘champion racehorse’: Eoin Morgan)

This hundred – his 25th in ODIs – was ultimately overshadowed by Buttler’s career-best 150 off 77 balls, which contained 12 sixes.

“He is superb, one of the best strikers in world cricket today,” said Gayle, who became the second West Indies batsman to score 10,000 runs in ODIs.

“He is playing all around the world and showcasing his talent. We can see he is a game-winner, a game-changer and every team needs a player like that to win games. He took the game away from us.”

Then came Gayle’s punch: “He’s not close to the Universe Boss – but he is a youngster and will get there eventually!”

England lead the series 2-1 and are hoping to to win a 10th straight bilateral ODI series. 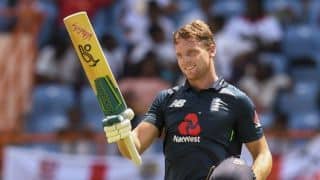 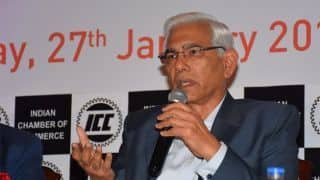