Buttler smashed 12 of the record 24 sixes that England hit in their 418/6 in the fourth ODI.

Jos Buttler‘s six-filled 150 off 77 balls in a record innings against West Indies in Grenada on Wednesday has moved England captain Eoin Morgan to term the explosive wicketkeeper-batsman as a “champion racehorse”.

Morgan also reached three figures, scoring 103 in a partnership of 204 with Buttler, but was happy to be overshadowed by his partner.

“Jos is built like a champion racehorse and when he gets into his stride he is very difficult to stop,” said Morgan.”Watching him in full flow was exceptional and gave us the best chance to put on a really strong score.” (READ: Chris Gayle enters 10,000-run club)

“Bairstow and Hales were absolutely excellent and got us off to a flying start – they laid the platform for myself and Jos to build a partnership,” said Morgan.

England would have been tipped favourites at the halfway mark of the game but Chris Gayle’s 97-ball 162 gave West Indies a strong chance for victory. England were in the end indebted to Adil Rashid, who claimed four wickets in five balls in the 48th over as the hosts went from 389/6 to 389 all out.

“It was a hell of a game of cricket,” said Morgan. “We really did go toe to toe with Windies and were very fortunate with the spell that Adil came back with to get us over the line. We were probably sitting in second position for the last 15 overs and we needed something special and Adil produced that in his final over.”

England lead the series 2-1 and are hoping to to win a 10th straight bilateral ODI series. 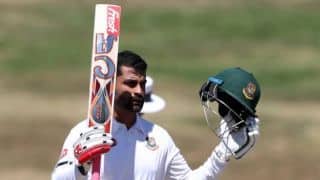