Joe Root admitted after the first Test defeat that leaving out Broad was the wrong call.

Former England captain Mike Atherton has backed the recall of Stuart Broad for the second Test versus West Indies in Antigua starting today, terming the veteran pace bowler’s inclusion for the must-win fixture as “the most significant” as the visitors seek to keep the series alive.

Broad, who has taken 433 wickets in 124 Tests, was the surprise omission as England went into the first Test at Kensington Oval last week with two spinners in Moeen Ali and Adil Rashid and included left-arm pacer Sam Curran to share the new ball with James Anderson and Ben Stokes.

England lost the first Test by 381 runs after being bowled out for 77 in their first innings. (READ MORE: ‘It’s great to be 1-0 up, but that’s history’: Jason Holder)

Joe Root later admitted the move to leave out Broad was the wrong one, and Atherton hoped the mistake would be rectified at North Sound.

“Of all the chat on Keaton Jennings, Joe Denly and Adil Rashid, I think that is the most significant change in terms of England’s chances of winning this Test,” Atherton said on Sky Sports. “They get a lad back with 433 Test wickets – there are more than 1,000 wickets between him and James Anderson – so you go back to England’s traditional new-ball pairing.

“That will give the England attack a bit more bite – they looked toothless at times in Barbados. They need to win this game to give themselves a chance of winning the series and getting Broad back is a good sign.” (READ MORE: Stuart Broad disappointed at being left out of Barbados Test)

Broad, who in Sri Lanka last year was sat out of the first two Tests, again faced the axe as England went with a second spinner in Rashid, looks primed to resume his new-ball duties with Anderson who during the last match became the first England bowler to take 200 Test wickets away from home 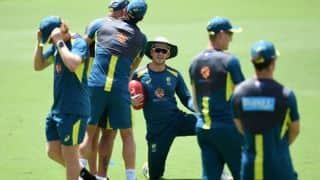