Only four bowlers have managed Test hat-tricks on two occasions.

Stuart Broad is aiming to become the first bowler to claim three hat-tricks in Test cricket after getting another taste of the sensation, albeit in a low-key warm-up match in Barbados where the opposition batted twice on a day 19 wickets fell.

Broad took 4/19 against a Cricket West Indies President s XI at Three Ws Oval on Thursday, in which his hat-trick spanned two innings as England were given the chance to bowl again in tune-up for the Test series.

The 32-year-old claimed the ninth, tenth and eleventh wickets to fall shortly before the tea interval on Wednesday, with the 23-year-old offspinner Bryan Charles his hat-trick victim. Alzarri Joseph and Miguel Cummins were dismissed of the fifth and sixth deliveries of his ninth over and off the first ball of Broad s tenth as the CWI President s XI were bowled out for 128 in 56 overs. (ALSO READ: Injured Olly Stone out of West Indies Tests)

Batting again, they made a further 75 runs for the loss of nine wickets. Charles poked to Ben Stokes at second slip to complete the hat-trick, and Broad s fourth wicket came when Jermaine Blackwood was dismissed for the second time in the day.

“It was a bit of fun actually,” said Broad. “Warm-up games, you’re just trying to get a feel for the action after having a bit of time at home indoors. You’re just trying to get a feel for bowling on grass and hard pitches again. But any time you’re involved in a hat-trick or get a hat-trick it is pretty exciting cricket. That was a lot of fun actually, I enjoyed it.” (ALSO READ: Don t underestimate West Indies at home: Stuart Law warns England)

“Nobody has got three and that is a bit of a goal of mine actually,” he said. “I got one at Trent Bridge against India and one at Headingley against Sri Lanka and I would love to get a third.” 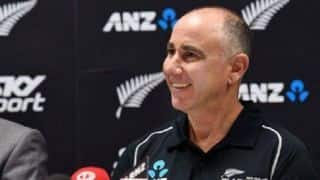