West Indies vs England 2019, 1st ODI, LIVE streaming: Teams, time in IST and where to watch on TV and online

West Indies vs England 2019, 1st ODI, LIVE streaming: Teams, time in IST and where to watch on TV and onli

England enter the home stretch of World Cup preparation with a five-match one-day international series beginning on Wednesday at the Kensington Oval against a West Indies team seeking to feed off the success of their Test side.

Fresh from a surprising 2-1 triumph in the Wisden Trophy duel, Jason Holder leads a Caribbean team which continues to struggle in the 50-over format and is hampered by the absence of key players for a variety of reasons.

In contrast, Eoin Morgan‘s England settled squad have powered to the top of the world rankings and a comfortable 171-run victory in their lone warm-up fixture on Sunday suggests that they will not be hamstrung by the challenges encountered by the Test team against surprisingly competitive and fiercely motivated opponents.

Weather: Windy, partly cloudy with a high of 29 degrees 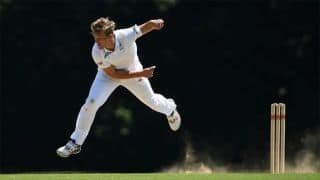