England started the three-game series on a five-match winning streak while the West Indies have lost their last four Tests.

West Indies were off to an encouraging start at 89 for one at lunch on the opening day of the first Test against England at the Kensington Oval in Barbados on Wednesday. (West Indies vs England, 1st Test: FULL SCORECARD)

Debutant John Campbell impressed with a stroke-filled innings of 44 off 53 balls with eight fours, before becoming the only wicket to fall in the session after home captain Jason Holder won the toss and chose to bat first on a pitch which has so far offered very little encouragement for the faster bowlers.

Campbell’s senior opening partner, Kraigg Brathwaite, will resume after the interval on 31 in partnership with Shai Hope (14 not out). (ALSO READ: England paceman Olly Stone has partial stress fracture)

England dropped a selectorial bombshell before the start of play in omitting senior seamer Stuart Broad, a veteran of 134 Tests with 433 wickets to his name, in preference for a second specialist spinner in Adil Rashid, given the expectation of greater assistance for the slow bowlers than had been initially expected in the lead-in to the match.

Sam Curran shared the new ball with James Anderson but while Anderson was the usual model of accuracy and economy, neither could effect the breakthrough with Campbell starting brightly in taking two boundaries to third man in the first over he faced from Curran.

However, his aggressive intent eventually got the better of him when Moeen Ali came into the attack. Clearly intent on beating the off-spinner off his line, Campbell swept two boundaries immediately but fell palpably leg-before in Ali’s second over when the left-hander missed another attempted sweep to end an opening partnership of 53.

Brathwaite, usually a phlegmatic occupier of the crease, followed Campbell’s lead in attacking Ali by hoisting a rare six – just his tenth in 54 Tests – over wide long-on with the lunch interval approaching. (ALSO READ: 1st Test: Why are England wearing black armbands against West Indies?)

In contrast to their opponents, West Indies have gone into the match with four frontline seamers as lanky pacer Alzarri Joseph, whose last Test was against England in Birmingham 17 months earlier, makes a return to the team with left-arm spinner Jomel Warrican omitted.

England started the three-game series on a five-match winning streak while the West Indies have lost their last four Tests, in India and Bangladesh, all inside three days. 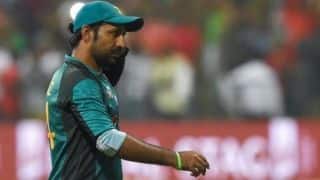