Both sides have faced each other 154 times with the West Indies emerging triumphant on 55 occasions.

A confident England side, fresh from a historic series sweep in the subcontinent where they whitewashed Sri Lanka 3-0 in the Test series, face a young inexperienced West Indies team led by Jason Holder in the first of the three-Test series which begins on Wednesday at the Kensington Oval in Barbados. (West Indies vs England, 1st Test: FULL SCORECARD)

History suggests England have not had decent visits to the Caribbean. They drew the Test series 1-1 the last time both sides faced each other in 2015. Moreover, in the last 50 years, England have managed to notch just one victory.

Both sides have faced each other 154 times with the West Indies emerging triumphant on 55 occasions. England have won on 48 occasions with 51 fixtures ending in a draw. (TOSS: West Indies elect to bat, England leave out Stuart Broad)

The players are wearing black armbands on Day 1 in memory of Ruth Strauss. pic.twitter.com/eW7Ws6RM9r

For the series opener at Barbados, England will be wearing black armbands in memory of Ruth Strauss, the wife of former England captain Andrew Strauss, who died after a battle with cancer after Christmas.

Ruth, who was diagnosed with cancer during the Ashes in December 2017, passed away a year later, aged 46 after suffering from a rare form of lung cancer.

Strauss, who was the Director of the England Cricket Board (ECB), had stepped down from his position in October last year to be with his ailing wife following a period of compassionate leave. Former England spinner Ashley Giles took over the position in December.

“It is with great sadness and immense grief that we have to announce that Ruth passed away today as a result of her rare lung cancer,” read the statement issued by the England and Wales Cricket Board (ECB) on behalf of the Strauss family.

“Sam, Luca and I will miss her terribly. Anyone who has met Ruth will know how loving, caring and passionately protective she was of her family and it gives us huge comfort that she was in Australia, the land of her birth, surrounded by those who love her, in her final moments.” 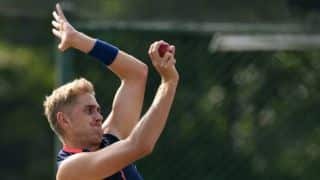