Following Monday s complete washout of the third match at the same venue the series remains locked at 1-1.

West Indies captain Jason Holder won the toss and put England in to bat in the fourth One-Day International of a five-match series at the National Stadium in Grenada on Wednesday.

Eoin Morgan s England team will be setting a target for the first time in the series after they successfully chased 361 in the opening fixture and fell 26-runs short of the target in the second match, both of which were played in Barbados last week.

Despite drafting him into the squad the West Indies selectors have omitted all-rounder Andre Russell from the final eleven and are playing the same team which would have featured in the third match two days earlier.

England have retained Alex Hales in their 11 from the previous scheduled game although he has been pushed to the top of the order with Jason Roy nursing a slight hamstring strain.

Ben Stokes has recovered from an ankle injury which would have ruled him out on Monday and he takes his accustomed place in the middle-order. 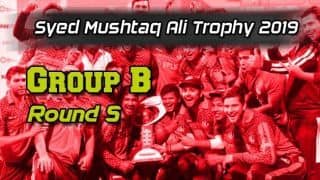