West Indies have left-arm pacer Obed McCoy as a replacement for Andre Russell for the remainder of their T20I series against England.

West Indies have left-arm pacer Obed McCoy as a replacement for Andre Russell for the remainder of their T20I series against England.

Allrounder Russell has been forced out of the series after “an adverse reaction he had to a medical procedure done in Dubai before he flew to the Caribbean.”

McCoy made his international debut during the India tour last year where he played two ODIs, taking four wickets in them.

The 22-year-old has played 10 T20s so far in which he has 10 wickets at an average of 26.80 with an economy of 8.16. Apart from that, he has also played in three first-class matches in which he has five wickets and in 18 List A appearances, has taken 17 wickets.

He will be available for selection for the second and third T20I against England to be played on Friday and Sunday.

Russell’s adverse reaction is related to a knee issue which has been troubling him for some time now.

England currently lead the three-match series 1-0 with their win in the series opening first T20I on Tuesday which they won by four wickets. 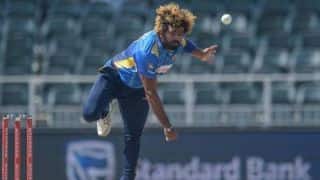 Players have to value opportunities, they won't come every day: Lasith Malinga