West Indies fast bowler Sheldon Cottrell said his unique military-style salute to celebrate his five-wicket haul against England was a mark of respect for the army regiment in which he serves.

The 29-year-old claimed 5-46 as West Indies won the second One Day International by 26 runs on Friday, with the left-arm seamer marking each breakthrough by marching down the pitch, standing to attention before snapping out a sharp salute to the side of his head with his right hand.

“It’s a military-style salute. I’m a soldier by profession. Me saluting is just to show my respect to the Jamaica Defence Force,” he told the BBC.

“I do it every time I get a wicket. I practised it for six months when I was training in the army.”

Cottrell’s contribution was hailed by West Indies captain Jason Holder whose team are now 1-1 in the five-game series. (ALSO READ: Sheldon Cottrell is one for the future: Jason Holder)

“Cottrell gave us that extra bit of variation with the ball. I love his energy. His is one for the future,” said Holder. 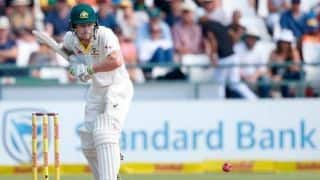