Mark Wood is over the moon and finally "feels like an England player" after his devastating spell of 5 for 41 against the West Indies.

Mark Wood is over the moon and finally “feels like an England player” after his devastating spell against the West Indies that helped England with a substantial advantage in the third Test at St. Lucia. On a day where a total of 16 wickets fell, Wood picked up his maiden five-wicket-haul to dismiss West Indies for 154 as England swelled their lead to 142.

Wood, playing his 13th Test admitted to be harbouring feelings of self-doubt all this while. Since his debut against New Zealand in March 2015, Wood had picked up 30 wickets from 12 Tests with a best of 3/39, before bettering it Sunday when he claimed 5 for 41.

“I think of all the hard times I’ve had with injury and a lot of self-doubt, actually – whether I was good enough to be at this level,” Wood told Sky Sports Cricket. “Today I’ve felt like an England player. I felt I actually merited my spot here – this time I wasn’t picked on potential, I deserved it.

“There were times where I had no confidence getting my front foot down. I was desperate to do well and trying my hardest but it just wasn’t happening. Luckily today’s a day when it has clicked and I’ll never forget it. Any time when things aren’t going right I can look back on this game and have fond memories.”

Wood couldn’t have chosen a more opportune moment for his maiden five-wicket-haul in Tests. Replacing Olly Stone in the squad, the ongoing third Test is Wood’s first since May last year against Pakistan at Lord’s. While he was away from the longer format, Wood admitted to have inculcated minor changes in his bowling. He was practicing bowling with a bigger run-up to reduce the stress he puts on his body, a tactical change he opted to embrace after the 28-year-old was forced off the field while playing for Durham in County Championship.

“The new run-up has helped,” he added. “I went away on the Lions trip and worked on some things and hopefully today’s the rewards from that. I feel I don’t have to force it as much now. I’m still hitting the floor but I feel I’ve got more momentum, more rhythm and I can get into the spin of things.

“Today it just clicked and I’m delighted to have a ball sat in there for a five-for. It’ll be hung up somewhere, that’s for certain.” 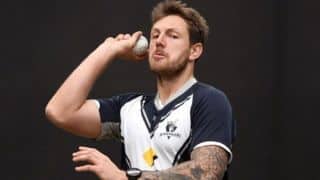 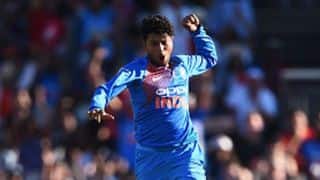