In what happens to be Gayle s final appearance in front of his home crowd, the Universe Boss is hoping to go out in style.

Chris Gayle is back playing in the West Indies and the flambouyant left-hander hopes to put on a show for his fans before retiring from ODI cricket at the conclusion of this year s World Cup. Gayle missed the previous two bilateral series for the West Indies against India and Bangladesh last year but was named in the series against England. And in what happens to be Gayle s final appearance in front of his home crowd, the “Universe Boss” is hoping to go out in style.

“Being back in West Indies colours is the most important thing,” he said. “I’m actually looking to go forward with the Windies. I’ll be bringing some experience to play and sharing that with the youngsters and I hope to enjoy the next couple of months with the West Indies cricket team.

“I’m always looking to put on a show. England fans love to see the universe boss exploding and entertaining you guys as much as possible here in the Caribbean and in the UK as well. I’ve set the trend for a long time, so hopefully I can continue in that same vein and play the game in the true spirit it should be played in.

Gayle s last ODI was almost eight months ago, during West Indies some series against Bangladesh, and while he has been away from international set-up, playing T20 leagues across the world should dismiss any doubts of rust. The first of the five ODIs against England takes place on Wednesday in Barbados, and Gayle, who scored a hundred the last time he played at the Kensington Oval, is hoping for a repeat.

“This series against England might be the last time people get to see the Universe Boss on local soil. The last game I played in Barbados for Jamaica I got a hundred and it would be nice to continue where I left off and entertain the home fans as much as possible. At the end of the day everybody should be happy and enjoy the game,” Gayle said.

“I don’t know who is opening the bowling for England, but any bowler is going to beware of Chris Gayle. That doesn’t change because he is 39 now, they are going to be saying ‘yes, he’s got some grey hairs in his beard, let’s get him now, this is the perfect time to get the universe boss now he is 39.'”

Gayle has been away from Test cricket since 2014 but admits to have followed the recently-concluded three-Test series which the West Indies won 2-1. From the sidelines, Gayle was impressed by what he saw and believes beating England could only mean wonderful things forward for West Indies and its cricket.

“It was a great Test series,” he said. “It was fantastic to watch from the sidelines and I think it was one of the greatest things to happen in ten years.

“I was the captain for the last home series win against England and to see Jason Holder lifting that trophy ten years later was fantastic, so hopefully as a unit we can get the better of England again in the ODI series.

“Yes, I’m positive about the future of Test cricket. It’s always been the ultimate. I know the youngsters coming up are all looking at T20 cricket, but I would urge them to try to play Test cricket. It will give them a chance to challenge themselves. Definitely they should try.” 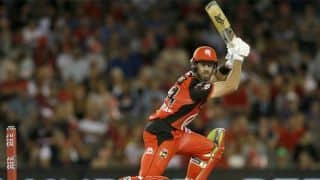