Woakes, explained that despite that fact that his knee tends to act up, it is not severe enough to affect his career.

Chris Woakes, the England allrounder, has dismissed concerns surrounding his dodgy knee, which has time and again bothered him. Woakes, suffering from tendinitis in his right knee, did not play the three-Test series against West Indies and was rested for the third ODI having not which was washed out due to rain, having not bowled in the second game.

Woakes, 29, explained that despite that fact that his knee tends to act up, it is not severe enough to affect his international career.

“It’s not a concern,” Woakes said ahead of the third ODI. “By no means do I feel I’m coming to the end or it’s the end of my career. My knee is something I’ve had to manage for the past eight years. It’s just a dodgy knee from too much bowling. There’s other guys around, who’ve probably got the same. It comes with the territory. It’s not something I’m overly worried about. I feel fit now and I’m good to go.

“We have looked at the World Cup schedule, and it’s not as tight as you might think. That might work in my favour. I got through four Ashes Tests last winter, plus all the warm-up games, the five ODIs, plus four ODIs in New Zealand. I had this then. I know I can get through cricket.”

Woakes played the first two ODIs but bowled in the first game, returning figures of 2 for 59 from 10 overs, the most economical of all the bowlers to bowl 10 overs as West Indies hammered England en route to posting a huge total of 360. He picked up the wickets of John Campbell and Shimron Hetmyer.

With the World Cup being England’s prime focus, Woakes is expected to be a vital part of their plans considering his all-round abilities, for which his workload is being carefully managed keeping in mind his role in the Ashes 2019.

“You have a job as a new-ball bowler to try and take wickets,” he said. “It’s the time when you’re most likely to get a little bit of movement. It’s tricky because most of the time the ball skids on and the batters are looking to score. But when batters are looking to score that gives you opportunities to take wickets. Dot balls are great, but we want to be getting batsmen out. My mantra as such is to put the ball where they don’t want. There’s no real magic behind it.”

As far as limited-overs is concerned, England’s pace attack is shaping up well with many players jostling for positions. Woakes is an option that cannot be ignored but faces competition from Liam Plunkett for the final seamer’s slot.

“Liam’s been superb for us in the past few years,” Woakes said. “You look at his strike rate: I think it’s up there with the best of all time which, in the modern game and through the middle overs, is an extremely great effort. He is as good as ever.” 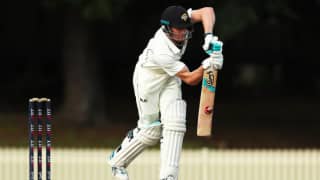