Mark Wood added a late spark to an otherwise disappointing Test series against West Indies as England sealed a consolation win to avoid a clean sweep in St Lucia.

Mark Wood added a late spark to an otherwise disappointing Test series against West Indies as England sealed a consolation win to avoid a clean sweep in St Lucia.

Like the spark, Wood was also a late addition to an England team that had lost comprehensively to West Indies, surrendering the Wisden Trophy meekly, without offering a hint of a fight in the first two Tests.

Enter Wood for the series finale.

In just 19 deliveries, Wood terrorised the home batsmen with such pace and ferocity that left England thinking what if the right-arm paceman had played in either of the first two match. Could the outcome have been different?

Before tea, on Day 2 of the third Test, West Indies lost Shai Hope, Roston Chase and Shimron Hetmyer to Wood in the space of 19 deliveries. He went on to complete a maiden five-wicket haul, 5/41, that eventually set the stage for a 232-run win.

You almost feel like a superhero, Wood told Guardian of his spell. I ve been playing Mario Kart recently and yeah, it s like when you get a magic mushroom and you re just absolutely flying.

He continued, I ll never forget the feeling of that spell. If I m ever down about my bowling I ll rewatch the highlights. I ve watched them about 20 times already probably more. This will sound bad but seeing it back I just thought: Wow, that s me. I couldn t believe how well I bowled and how fast it looked on TV. I was so happy.

Before that spell, Wood had undergone three ankle surgeries, lost his love for cricket and in an effort to remain injury free, had lengthened his bowling run-up to lessen the stress on his body.

The performance, Wood feels, has given him the confidence that he belongs to the international stage. I held the ball up and felt so proud, then I got into the pavilion, had hug with the physio Craig de Weymarn he s touched me in places my wife never has! and it all sunk in. It was everything I d wanted after all I d been through with injury. I know it s only one five-fer and there s Jimmy and Broady with tons of them, but it was so special. I felt I finally belonged in the England Test team. I put the ball in my England cap, sat them next to me and just looked at them. All the emotions came out. I was a bit teary, he said.

Throwing more light on his spell, Wood said, You could see their batsmen coming in and looking more nervous, he said. Hetmyer had attacked our bowlers from the outset in the first two Tests. I expected more of the same and when he didn t I thought: I ve got him here. I m on top of him. As soon as you feel like that it s like: Right, any ball I can get a wicket. I was so in the zone too, I didn t know my field. I was just so focused on the batsman. 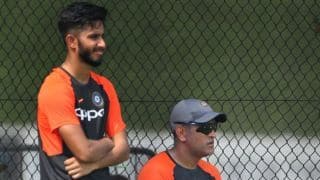