Mike Atherton has been impressed with the way West Indies have performed in the ongoing three-match Test series against England.

Mike Atherton has been impressed with the way West Indies have performed in the ongoing three-match Test series against England. (ALSO READ: I feel lost how we got only six wickets – Broad)

England entered the Caribbean shores as the favourites on the back of consecutive series victories against the likes of India (home) and Sri Lanka (away). However, West Indies, ranked eighth in the world, crushed their challenge in Barbados with an imposing win to take 1-0 lead in the series.

“I’ve been really impressed by the West Indies in the seven days of Test cricket we’ve seen this winter; their commitment and discipline every day has been outstanding,” Atherton told Sky Sports.

West Indies struggled as they lost several first-choice players who gave preference to T20 leagues across the globe rather than slogging it out in the longest format of the game. However, former England captain Atherton feels that the current lot belongs to a different era under Jason Holder who has got a fierce grip on them.

“A generation has moved on now. They will still play Twenty20 cricket but this is a different dressing room. The only survivor from that previous era is Darren Bravo, who has come back into the dressing room,” he said.

He continued, “I think Holder has got a fierce grip on his team; he’s a very disciplined young man himself and we all know Jimmy Adams well, who leads West Indies cricket here in a more general sense, and if there’s one thing that Jimmy Adams is, he’s a highly-disciplined character.”

In the ongoing second Test in Antigua, the hosts have edged ahead having taken a lead of 85 runs on Day 2 with four wickets still remaining on a tricky pitch.

Atherton says a lead beyond 100 is going to make things difficult for England and that they will have to show the same amount of application and discipline as West Indies to save the match.

“It’s a very significant lead on this pitch. You can say it eased a bit today but it looked a very difficult pitch to bat on to me, even at the end when England’s bowlers were tiring the odd ball was kicking. Once that lead is beyond 100 and Windies’ bowlers are fresh, it is going to be very, very difficult indeed and England have to take a bit of a lead out of West Indies book and try to show the same application, commitment and discipline that they did,” he said. 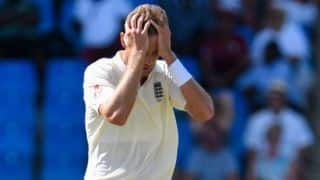 I feel lost how we got only six wickets: Stuart Broad