West Indies will be looking for a win to square the series.

After winning the first Twenty20 International (T20I) via Duckworth Lewis Method by 12 runs, New Zealand will look to wrap up the series by defeating the hosts in the second game at Roseau. West Indies, led by Darren Sammy, need to win the second game to at least draw the short two-match series 1-1.

In the first game held at Roseau, despite Andre Fletcher’s fifty and Darren Bravo playing a fine innings, West Indies never looked like posting a good total. The rain breaks didn’t help their cause either. New Zealand on the other hand, would buoyed by the form of their pace duo, Trent Boult and Tim Southee, who picked up wickets.

New Zealand’s batting department led by the experienced duo of Brendon McCullum and Ross Taylor also did well. The West Indies, they will look to Samuel Badree and Sunil Narine to make more of an impact in the second game.

In the first match, New Zealand’s batsmen — while chasing a modest total — milked the spinners rather well. West Indies also have Krishmar Santokie, whose lack of pace can come in handy when the track grips a bit. The likes of Lendl Simmons and Dwayne Smith need to pull their weight in the batting department.

With the Test and T20I series being held in June and July, there is always a threat of rain playing spoilsport in the Caribbean.  The track for the first game was o the slower side. The outfield too was on the slower side and that was due to rain coming into play. 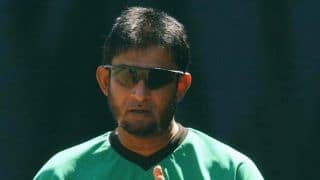